A boy hid her in his luggage 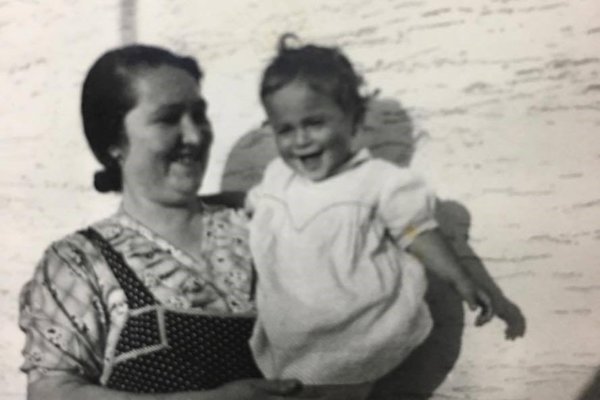 Cecília Scheibenreifová worked as a cleaning lady during the war for the local national committee in Nitra, and Ferdinand Felsenburg worked there as an officer.

Cecilia was a widow raising three boys - Rudolf, Jan, and Josef. They were living under very difficult financial conditions, in a one-room flat in a poor quarter of Nitra. The flat was situated in a house owned by Felsenburg.

To earn some more money, she often went to the Felsenburgs to clean their flat.

A desire to be free saved her life

When the deportations of the Jews were renewed in September 1944, the Felsenburg family - Ferdinand, his wife Herta and their 6-year-old daughter Eva - found shelter from the Nazis in an underground bunker on a farm, which belonged to a non-Jewish couple named the Nagys, on the outskirts of Nitra.

Inside the small bunker, the Nagys were hiding three Jewish families - 13 people altogether. Eva was the only child in the group and did not like to be locked up in such a gloomy place all the time. Therefore, when it became dark, Mrs. Nagy would come and take her out for a short walk around the farm.

One evening after they returned from their walk, they discovered nobody was in the bunker. No one remained. All the families, including Eva's father and mother had been discovered by the Gestapo and taken to concentration camps. The couple had no children and decided to help Eva by taking her into their house, hiding her in closets due the constant fear of discovery.

Once, the Nagys' neighbours' house was raided by the Gestapo who discovered a Jewish woman in the house. The woman told them about Eva in the hope that she could save her life. The Nagys, in panic, contacted Cecília to shelter Eva.

A wheel-barrow and a suitcase

Cecília sent her oldest son, 9-nine-year-old Rudolf, to bring Eva back to Nitra. He used a wheel-barrow, in which Eva was hiding, covered with dirt and soil, to sneak her into their small apartment safely.

Eva lived with the whole family, Cecília and her three sons. She was not allowed to leave the apartment because of the fear that the Gestapo would find her.

Once, when the soldiers knocked on the door of the Scheibenreifs' flat, Rudolf displayed great ingenuity and quickly put Eva inside a piece of luggage, shoved it inside the closet and put sheets and towels on top of it. The Gestapo searched the whole place and even opened the closet. Luckily, they did not open the suitcase.

Eva and Ferdinand leave for Israel

Until the end of the war, Eva was shuttled back and forth between the Nagys and the Scheibenreifs.

After the war, only Ferdinand came back from Auschwitz, Eva's mother Herta died there. Ferdinand returned in such a bad condition that even his own daughter could not recognise him at first. Ferdinad and his daughter returned to their partially bombed house in Nitra to find the Red Army stationed there. The soldiers emptied only one room for them.

Once the State of Israel was established, Ferdinand took Eva there to live a better life. Eva, or Hava in Hebrew, later graduated from university as a pharmacist and raised a family.

Ferdinand and Cecília were in touch until the end of their lives. When Cecília passed away, the contact between the families faded away.

But, the great grandson Tomáš Čéntéš, who learned the story from his grandmother, has recently revived contact between the families.