It will construct a new line to produce more electrical steel.

The U.S. Steel Košice (USSK) steelworks will build a new line for the production of non-grained oriented electrical steel, investing $130 million. Its production capacity is expected to be roughly 100,000 tonnes a year, the TASR newswire reported.

The construction will start in mid-2019, while it is expected to launch production at the end of 2020, said Ján Bača, a USSK spokesperson.

Slovakia as a steel-production leader

"We are going to build this new line for non-grain oriented electrical steel because of the growing demand from our clients," said USSK President James. E. Bruno, as quoted by TASR.

He considers Slovakia to be a European leader in the steel industry, adding that the USSK wants to become a long-term, priority supplier of steel for global players. 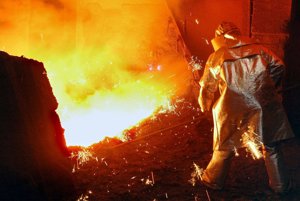 The new line will manufacture high-quality and advanced electrical steel sheets, which can be used in e-cars, or for manufacturing devices that produce electricity, He added.

"I welcome this investment and orientation towards this sector since electromobility will become a trend in Slovakia in the years to come," said Economy Minister Peter Žiga, as quoted by the regional Korzár daily.

No stimuli will be provided

Prime Minister Peter Pellegrini considers the investment good news, especially after the months of speculation that the Americans want to sell the company.

"The decision to invest more than $130 million is a good signal for all the people living in Košice," said Pellegrini, as quoted by Korzár, adding that the investment confirms that USSK wants to remain in Slovakia.

The prime minister confirmed that the company did not ask for any stimuli.