A woman who became a mother to little Jewish girls

Štefánia took care of her children but also of sisters Vera and Denisa. 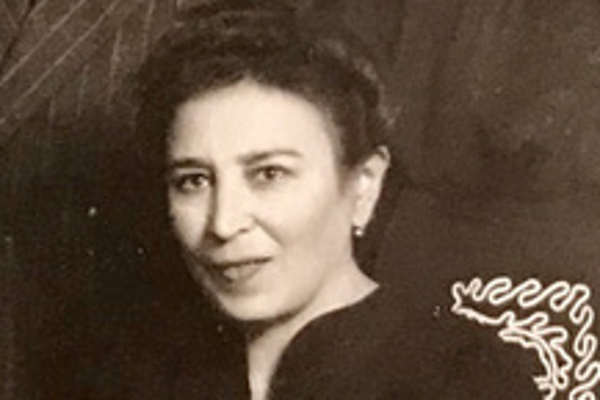 The Rosenthals, Aurel and Marta, lived with their daughters Vera and Denisa in the town of Spišská Nová Ves, where they ran a wholesale business for groceries and food supplies. In 1939, after the establishment of the Slovak State and the first appearances of Aryanisation as part of the Pro-Nazi Slovak government's policy, Aurel transferred their shop to František Peller, one of his employees.

Aurel continued to work at the store and was even recognised as vital to the state's economy. Thanks to that, he and his family were not deported to Poland. According to the testimony of his daughter, Vera, the Rosenthal and Peller families got along very well, trusting each other.

František Peller died on June 4, 1944, and his widow Štefánia Pellerová took his place at the shop.

The situation changed completely in late August 1944. When the Slovak Anti-Fascist uprising began and Nazi Germany occupied Slovakia, the final step of eliminating the Jewish population in Slovakia followed.

At first, the Rosenthal family found shelter in a secluded hut outside the town, but due to the constant searches conducted by Germans and nationalist Slovaks after Partisans and Jews, the danger they were facing became greater and the family decided to leave this place.

In the process, Marta Rosenthal suffered from a nervous breakdown, and the couple found a refuge in a hospital in the nearby town of Levoča. At the same time, Štefánia Pellerová, who was a devoted Christian, took the two Rosenthal daughters under her wing and brought them to her home.

Life in the attic

Vera and Denisa were hidden in the Peller family house in a tiny room of the attic; because of various dangers, they almost never left their room. Štefánia and her 16-year-old daughter Elena made sure to provide them with food and other items.

The Peller couple had five children, who were born between 1913 and 1927; except for the elder son, all of them lived in the same house. Štefánia's parents also lived there.

Things got worse during Christmas 1944: A German officer established his residence in one of the rooms in the house. Because of this, as well as the increased bombings and the frontline moving closer, the two Jewish girls were forced to move from the attic to the basement.

During the alarms, 12 people were crowded together in the basement. To ensure the safety of Vera and Denisa, they had to hide in a different place which was used for storing coal and wood.

Spišská Nová Ves was liberated by the Red Army on January 28, 1945. The two daughters were saved thanks to Štefánia Pellerová.

They found out about the fate of their parents only after the war.

They were captured at the hospital; their father, Aurel, was deported to concentration camps (Lublin, Auschwitz, Ravensbrück, Sachsenhausen, and Buchenwald). He survived the war and returned to the town. Their mother was accused of conspiracy with the Partisans, and after severe torture, she was executed by SS members.

In 1968, Vera and her husband escaped from Czechoslovakia to Germany and then emigrated to Israel. They had two children and seven grandchildren. Vera passed away in 2010.

Denisa lives in Bratislava. She has two daughters, two grandchildren and two great-grandchildren.