The challenge for 2019 will be to have the unemployment rate fall below 5 percent, Labour Minister Ján Richter stated.

The unemployment rate in Slovakia broke another record. It fell to 5.04 percent in December 2018, down from 5.09 percent compared with the previous month. When compared with December 2017, it decreased by 0.9 percentage points, according to the latest data from the Central Office of Labour, Social Affairs and Family (ÚPSVaR).

The number of job applicants ready to take a job immediately amounted to 138,198 people last December. While the number has dropped by 1,329 people in monthly terms, annually has dropped by 23,717.

Many vacancies in Bratislava

December 2018 brought a drop in the m-o-m unemployment rate in six of the eight regions, with the most significant being reported in the Bratislava Region. 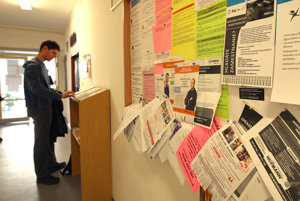 At the end of December 2018, there were 73,890 vacancies. Their number dropped by 6,604 m-o-m. The most vacancies were in the Bratislava Region, the fewest in the Banská Bystrica Region.

The challenge for 2019 will be to have the unemployment rate fall below 5 percent, Labour Minister Ján Richter (Smer) stated.

“The number of extremely long-term unemployed dropped by one-quarter,” Richter said, as quoted by TASR, adding that the number of unemployed new graduates also decreased.

In the main, those who want to work and look for jobs are registered in the offices. Among these are young people, but also people with just a basic education.