The “commoner’s” Central Europe is hollow

We have inherited the Habsburg’s conservative worldview along with their hot desserts. 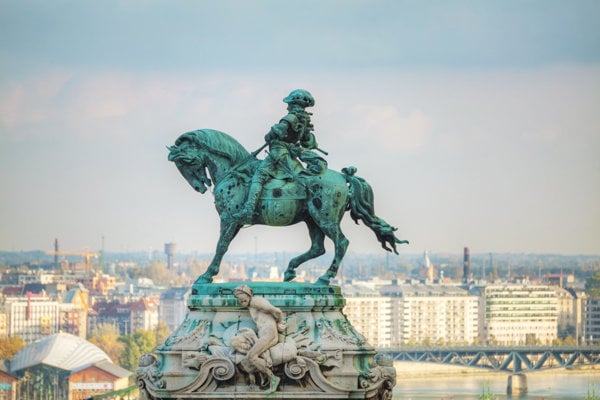 During the nineties, it was fashionable in Central Europe to explore one’s own noble origins and, in so doing, gain a better understanding of history in general.

This was especially pronounced in Slovakia, where a particular passion for learning about ancestry drove many to try their best to defeat the thesis that the Slovak character was plebeian in origin, as Vladimír Mináč asserted. Eventually, a trove of studies by historians proved those believing in the aristocratic Slovak origin were right.

The quest for nobility

At some point during this time, our intimate search for Central European peerage flourished. Genealogists ran their ads in the classifieds, and every other fortune-teller would persuade those willing to part with enough coin that their forebearers inhabited the Habsburg court in the 19th century or descended from families of palatines and earls.

The desire to find one’s aristocratic roots, even if they were somewhere on the level of impoverished gentry, was fundamental for contemporary emancipation and played a symbolic role in the search for a place among other European nations, where nobility still enjoyed a special status.

Several important families sprang up in Polish, Czech and Hungarian politics with familiar names like Lobkowitz, Schwarzenberg, Esterházy. They were venerable and, at the same time, possessed a vitality for restitutions, proving to the patented old European nations that after the fall of the communist regimes, the new floodgates of history were opened.

Secret family stories about the illegitimate children of the Pállfys and the Thurzos or about earls surviving in communist blocks of flats became part of the new social and political identity of the region.

This quest for one’s own ancestors in the countries of the former Hungarian crown resulted in the sale of noble titles, much like diplomas from certain present-day, private universities. These personal investigations were our way of validating our belonging to the Habsburg monarchy, Central Europe’s most significant political unit in history. It was through this common historical identity that we found a new, sovereign and self-confident congruence, the Visegrad Group.

In attempts to restore our nobility, still considered a strong symbol of continuity in Europe, we unwittingly took not just the recipes of the Austro-Hungarian cuisine and their hot desserts from the Habsburg times, but also their conservative worldview.

Yes, despite the horse-riding Sissi and Andrássy, the Habsburg Empire was one of the most backward examples of clerical formalism and mafia-style feudalism where the wealth of the country was controlled by the contemporary likes of Bašternák and Babiš, only with better-sounding names, like Andrássy.

The legacy of this conservative thinking and general cultural lagging-behind that Bram Stoker ascribed to Central Europe descended through the history of the fascist and communist dictatorships, deep into the life of our current society.

It has taken the shape of a hostile state, which we encounter in the dubious understanding of politics, where politicians do not serve their voters. Moreover, governmental offices actually build a bureaucratic maze of duties and processes that strengthen the authoritative loyalty towards the state.

Much like the Habsburgs, we see a certain sanctity in symbols. Statues, flags, busts and trampled flags become fetishes and tools to contaminate the remaining public space with empty ceremonies and political spectacles.

When it comes to draining the sense of the state’s existence and its symbols, in the V4 we defeated the mother of all solemnity – the Habsburg monarchy – which collapsed due to its inability to offer its inhabitants a sensible plan of transition into the 20th century.

The countries that descended from this monarchy adopted its empty ceremonies, the murky heraldry and the fabricated rites. There are places where people burn bamboo torches and fire cannons; there are countries covered in flags one might buy in an antique store. Yet, we cannot seem to grasp the true sense of our regional existence.

Well-known circumstances have landed us – and our (now confirmed) noble origins – in the company of venerable states. Slovaks are no longer the shepherds that they used to be in the eyes of Czech tourists; the Poles washing dishes in London take pride in their noble history, and the Czechs have somehow proven that they are more than de facto “East” Germans.

But the spirit of the ossified Habsburg monarchy survives in our societies like chronic neuropathy.

We have built a new, commoner’s version of the Habsburgs in the centre of Europe, adapting its gloomy metaphysics of the divine fate, the Central European “manifest destiny” akin to Musil’s “Man without qualities”.

Our joint actions and the way we have tried to distinguish ourselves from the Anglo-Saxon invention of liberal democracy in recent years puts us in a position similar to that of the monarchy after the Austro-Hungarian Compromise.

We like to think that we are changing things radically, but, in fact, we are ever closer to the fatal moment of the breakup of Central Europe into chauvinist states that will fall victim to Russia’s imperial cannibalism.

The road to Sarajevo

One of the reasons for our insufficient immunity against the destructive calls for fatal self-sacrifice is the retreat of common sense and enlightened thinking as well as the lack of creativity among our politicians.

We have got caught in a civilisation trap. In the event that the world reacts to globalisation by closing off its communities, we will once again be left on our own, at odds with our enemies and allies, with no motivation or plan whatsoever, with no money that Orbán believes to be coming from the under-performing Hungarian economy and with no people left because everyone will want to move out.

But, up until our last moment, we will wave our flags, build equestrian statues and have soldiers march wearing their laced uniforms because, just like the Habsburgs, we also reckon that it’s enough to just fake the existence of society and the state, to imitate it with our ceremonies, with our increasingly incomprehensible words.

We think we can make believe that the future is ours, despite climate change and the technological counter-revolution. Paradoxically, we think that the world is none of our concern, and yet we – Central Europeans – with our family ties to the Austrian crown, will also be the new avant-garde of Europe.

And follow this train of thought all the way to our Sarajevo.

This article is part of the #DemocraCE project organised by Visegrad/Insight. It was originally published in Slovak on SME and can be found here.