More than 300 journalists have supported a petition calling on politicians to turn down a controversial amendment to the Press Code. 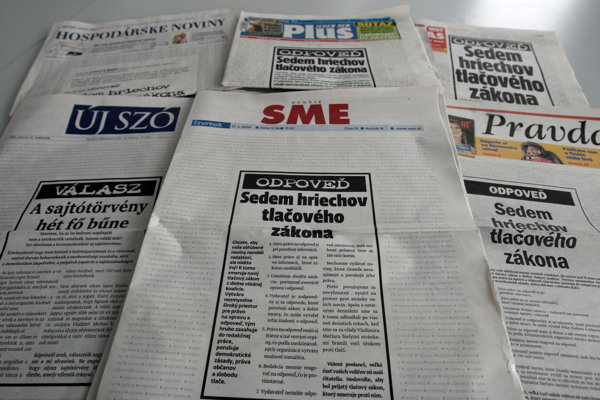 The right of reply was problematic also back in 2008. (Source: SME archive)
Font size:A-|A+  Comments disabled

Journalists from several media outlets have signed a petition criticising the recent attempt to reintroduce right of reply for politicians. They are calling on MPs not to support the respective legislative change.

“After the murder of journalist Ján Kuciak and his fiancée Martina Kušnírová, we expected the state to try to find a way to better protect journalists,” reads the petition, signed by more than 300 journalists. “This has not happened. Conversely, the ruling politicians, with the support of ĽSNS, are only dealing with how to protect themselves.”

To so do, they have submitted an amendment to the Press Code to the parliament, trying to reintroduce the compulsory right of reply also for politicians. Though there are numerous possibilities for them to comment on topics that involve them, they often refuse to and some do not even answer the questions the media send them at all.

“Politicians should not decide on media content in democracy,” the petition reads.

There is now the threat that politicians will want to comment on every article written about them, even if the information is truth. They want to flood the media with statements that may not correspond with facts.

“Parliament is discussing the amendment at a time of verbal attacks on journalists, when critical media are being described as the enemies of state,” the petition states.