The turnout in presidential elections may be high

The Focus pollster calculated that up to 60 percent of voters may show up. 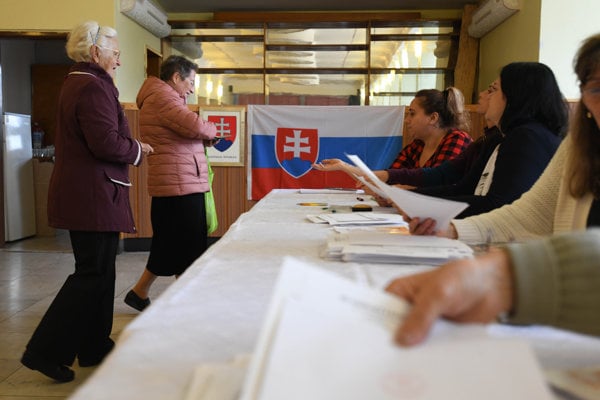 The turnout in the upcoming presidential elections may be higher than in previous years.

While the number of voters casting their ballots in the first round was not higher than 50 percent in the past three elections, this time it may be as high as 60 percent. It stems from the poll carried out by the Focus agency, which refers to the pre-election poll from this year, as well as polls from the years 2004-2019, the Denník N daily reported.

If the prediction turns out to be true, it would be the second highest turnout in the past 20 years since the direct election of the president was introduced. So far, the most people showed up in 1999, with turnout amounting to 73.89 percent in the first round. However, this election was special since people were deciding on the future of controversial politician Vladimír Mečiar in top politics, as Denník N pointed out.

Focus has conducted similar surveys before the first round in the past, and they have been more or less accurate until now. However, Martin Slosiarik, head of Focus, is careful about the predicted 60 percent, since it is really very high.

“We used this model in three elections and it worked,” he told the Denník N daily. “We are curious as to whether it will work now or something has changed in the past five years or we have carried out the survey when the enthusiasm of voters has culminated.”

“It’s a huge number, particularly when compared with the previous elections, where only about 41 percent were decided to vote from 90-100 percent,” Slosiarik told Denník N.

Such a high number can mean that the mobilisation of voters calling for change, which started before the 2017 regional elections and last year’s municipal elections, is continuing. Those more mobilised can be young people, middle-aged voters and people who want to see a change in their country, he added.

Moreover, voters who did not want to vote in the past may be now decided to go and cast their ballot.

In Slosiarik’s opinion, a higher turnout may help Zuzana Čaputová, while a lower one would benefit Maroš Šefčovič, who would be elected mostly by Smer voters, who belong among the most disciplined voters.

He also admits that the high number of voters deciding to attend the elections can be the result of the varied group of candidates. Apart from the liberal Čaputová and socialist Šefčovič, there are several conservative candidates, as well as the anti-system supporters and the supporters of a neo-Nazi.

“For many people it does not have to be a choice of the lesser evil,” Slosiarik told Denník N.