Central Europe has a branding problem

Čaputová winning would be a great story, but the odds are it will hardly register internationally. 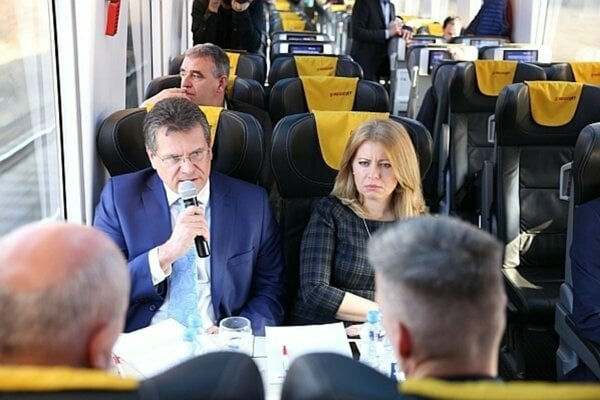 One of the debates of this presidential campaign took place on the train. Maros Sefcovic speaking on the microphone, next to him sits zuzana Caputova. (Source: Petit Press)
Font size:A-|A+  Comments disabled

As the Romanian director Cristian Mungiu once noted: “People always relate [my movies] to communism, because they don’t know anything else.” The same holds for Central (or in Mungiu’s case, Eastern) Europe generally.

International discussion of the region repeats: Did you hear that shocking thing Miloš Zeman said (again)? Viktor Orbán really doesn’t like George Soros (still). Are Poles really that Catholic (yes)? And, by the way, while you were reading this they just bought some more American weaponry.

For its part Slovakia is simply grouped with the rest of the region and there are a limited number of stereotypes acceptable for framing Central Europe in global media: still haunted by communism or fascism, hapless victims of Russian disinformation, rotten with corruption or generally irrational in the face of whatever the Dutch or Germans (or whoever) think is the way things should work. Inversions of all these themes are also acceptable: reckoning with the communist past, heroically confronting Russian malfeasance, cleaning up corruption or reasonably toeing the official European line.

In international editorial offices, pretty much everything else is deemed too complicated for fear it might confuse readers, watchers or listeners who have a certain impression of what Central and Eastern Europe is like.

Slovakia’s coming presidential election is a perfect example. On the surface, it looks to be a pretty good story. If we are to believe polls, Zuzana Čaputová, a young, liberal female is on the verge of winning. This is interesting, exciting and almost certain to be ignored.

Pretty much the only way this ends up something of interest for international media is if Čaputová enters a second-round runoff with someone like Štefan Harabin. In that instance, acceptable framing devices can be deployed — a youthful liberal does battle with an old oligarch-friendly strongman type, Westward-looking clashes with Eastern-oriented or europhile takes on euroskeptic.

Central Europe’s (and Slovakia’s) branding problem comes in part from laziness and a lack of curiosity by foreign media, as well as public preference for negative stories.

Any other scenario, say a second round Čaputová victory over Maroš Šefčovič, and the story doesn’t make the cut. In fact, if the election moves according to the latest polls, the anniversary of — not the actual event or investigation — Ján Kuciak’s and Martina Kušnírová murder will almost certainly receive more international coverage than a Čaputová presidential victory.

With all due respect to the deceased (they were innocent young people cut down in their prime), an anniversary is what is known in news as a “pseudo-event”, whereby an election is an actual event.

Central Europe’s (and Slovakia’s) branding problem comes in part from laziness and a lack of curiosity by foreign media, as well as public preference for negative stories. But there is also sense that Central Europe must be doing something wrong in promoting itself.

Čaputová winning would be a great story, but the odds are it will hardly register internationally. Her toughest job might be making sure that’s different five years from now.