Dobšiná faces tensions after the death of a local football player

Far-right ĽSNS organised a protest in the town. No serious incidents occurred. 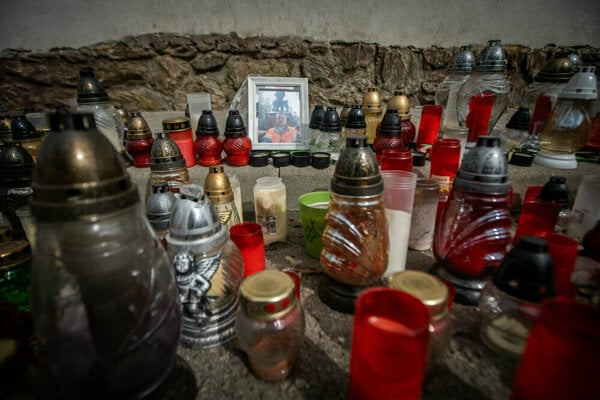 Many candles have been lit at the place where 38-year-old Štefan died. (Source: SME)
Font size:A-|A+12

The town of Dobšiná (Košice Region) has been witnessing tension between its Roma and non-Roma inhabitants following a tragedy that occurred on March 16, the Sme daily reported.

21-year-old Roma Ondrej killed 28-year-old Štefan, who worked in the forests and played on the local football team, in front of a pub. This allegedly happened because the innkeeper did not want to let Ondrej and his pregnant partner enter the place. Štefan, who was at the pub at the time, opened the door. Ondrej hit him with a slat on head, and Štefan died.

Ondrej has been charged with manslaughter and taken into custody. He could face 20 years in prison.

Meanwhile, the far-right People’s Party – Our Slovakia (ĽSNS) organised a march in the town on March 24 to “commemorate” the killed football player.

Fear and tension in the air

Dobšiná has the second highest number of Roma living on its territory, after Jelšava. They comprise 40 percent of the total number of inhabitants.

“Nobody expected this would happen,” 17-year-old student Bibiana Vlčeková told Sme. Though the relations between Roma and non-Roma people have never been ideal, there have not been any problems of this magnitude between them before, she added.

“We are afraid; they have threatened us,” Renáta Bartková told Sme.

Most of the people addressed by Sme understand that the Roma cannot be blamed for the acts of one person. This is why many of them refused to attend the march organised by ĽSNS. The mayor, Ján Slovák, also called on people not to attend, the daily wrote.

However, some have admitted they are afraid of the Roma, particularly when it is dark and they have to travel through the parts where public lighting does not work.

A march without conflicts

The members and sympathisers of ĽSNS met in Dobšiná on March 24. They met in the square and later moved to the place where Štefan was killed. Some even lit candles.

Though there were some groups of Roma in the square, no incidents occurred, local Roma leader Marián Bubenčík told the regional Korzár daily.

This was later confirmed by the police.