Companies prove once again they care about people and the environment

Who won the Via Bona Award for responsible business? 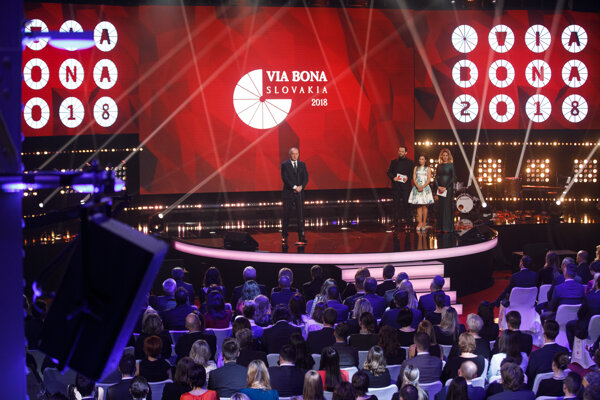 Teaching children more about conspiracy theories, helping people with various disabilities and assisting Roma looking for their very first job: these are just some of the ways companies active in Slovakia are improving the lives of their employees and communities.

The Pontis Foundation awards responsible and fair businesses that engage in this type of work and inspire other firms to pursue the same goals. The Via Bona awards, which will be granted for the 19th time this year, award businesses in eight categories.

“All of us can fulfill our country’s potential,” said Lenka Surotchak, executive director of the Pontis Foundation, during the April 2 gala. This includes not only individuals, but also companies that care about their employees and surroundings.

Altogether 45 small, medium-sized and large companies active in Slovakia submitted their nominations this year, of whom 23 made it to the shortlist. The jury subsequently picked winners in eight categories, who received the awards at a ceremony held on April 2.

Oil refinery Slovnaft has a unique sport-relaxation centre where its employees and their families can spend their free time.

The project is unique since it was initiated, coordinated and completed by the employees. They revitalised a dilapidated building close to the company, turning it into a modern Slovnaft Relax centre. It opened in mid-September 2018.

“With the support of other members of the management, our original idea grew into something much bigger and turned into a Slovnaft Relax centre,” said Oľga Kubalíková, chair of the Association of Apollo Clubs, which organises sports and free time activities for Slovnaft’s employees.

The refinery offers its staffers an annual credit and various discounts to their family members who can bowl, go to the fitness centre or enjoy wellness.

The Košice-based company T-Systems Slovakia has developed an app that serves as an active guide for visually-impaired people visiting the museum.

Based on the network of sensors, it can find the person’s location and tell them which exhibit they are looking at, as well as warn them against danger, like an obstacle on the floor.

“We decided to ‘hack’ the life of people who need it the most,” said one of the initiators, Veronika Matejová.

This solution allows visually impaired people to visit the museum alone. Currently, the special sensors are installed only in the Eastern Slovak Museum, but other spaces should soon follow.

The company Nosene gives used clothing a second chance and spreads the idea of sustainability in the fashion industry. It collects and sells old clothes that are selectively chosen and cleaned, showing the public that used clothing does not have to be thrown out.

A portion of the selling price goes to abused women living in the asylum house run by the civic association MyMamy. At the same time, the company raises awareness of textile waste recycling and the impact of fashion on the environment.

“We’re creating a community that wants to change textile waste, which is currently not a focus in Slovakia,” said Katarína Hutyrová, the company’s co-founder and co-owner. “We also want to give clothes a meaningful second life.”

AWARD FOR A CONTRIBUTION TO MEETING SUSTAINABLE DEVELOPMENT GOALS

In response to the lack of an available workforce on the market, Stiga Slovakia launched a project that employs the available labour force in the Spiš region, particularly the marginalised Roma.

Carried out in cooperation with the People in Need organisation, which has its own infield workers in several Roma settlements, the project changes the perception of the majority of Roma employees and combats several stereotypes associated with them.

For many of them, this is their very first chance of legal employment.

“We offer jobs to people in the region, help improve the living standards of marginalised groups and contribute to fighting poverty and social differences in our society,” said Pavla Mončeková, HR manager in Stiga Slovakia.

FAIR PLAYER IN THE MARKET

The publisher of the Denník N daily has issued four handbooks complementing existing educational materials on several phenomena that occur in contemporary society, such as lies, conspiracy theories, critical thinking and media operation. The aim is to introduce the topics to teachers, as well as primary and secondary school pupils.

With this unique and original educational project, the reporters team up with teachers, parents and the public to systematically broaden knowledge and raise awareness in specific fields that have an impact on students and readers, like media literacy.

“There are many people and subjects in Slovakia who care about the quality of education and the future of Slovakia,” said Lukáš Fila, publishing director of N Press.

Slovak Telekom has launched several projects throughout the years, focusing on the hearing-impaired community while creating a country that does not view disabilities as obstacles. It has supported more than 40 hearing-impaired entrepreneurs during a five-year programme, teaching them how to start their own business while providing them with grants.

Moreover, through its Online Interpreter service, the company helps the hearing-impaired communicate in various situations, such as a visit to the doctors, a job interview and a flat rental meeting.

Slovak Telekom also focuses on the early care of children. The six-year long Mobile Teacher programme prepared and adapted families with hearing-impaired children for new conditions, helped them accept their hearing-impairment and assisted them in jump starting their education via in-field early intervention.

“We believe that parents can do a lot to change the system of care of their children,” said Tatiana Švrčková, senior CSR specialist in the company. “But it will be quality only if they cooperate with experts, creating and bringing proposals.”

Jana Liptáková and Peter Dlhopolec contributed to this report