Send that blasted Brexit off to history

Congratulations to the responsible citizens for expressing their will. Keep up the pressure! 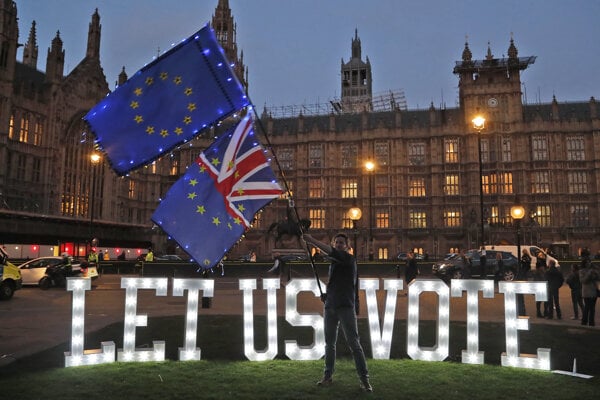 Looking at the masses of people on the streets of London, finally we had a feeling of relief. Hope shone bright for us. There was light at the end of the tunnel.

Brexit had thrown us, together with Britain, into a frame of mind like the peculiar absurdity of a Chekhov play. We did not want to believe that one of the most developed democracies, where also some of our own citizens have sought refuge, had found itself in such disorder of mind that it first voted on whether Brexit ought to happen and only then made a serious analysis of the situation.

From our own standpoint, it seems that the British are showing the world a variant of its current manner of deciding about things of supreme importance. First we come to make the decision under the influence of irresponsible, egocentric political gamblers, subjecting ourselves to disinformation, falsehoods and media manipulation. Only afterwards will we undertake a serious analysis and discover the consequences of the supremely important decision we have made.

Even if the sky should fall?

There is no doubt whatever that Brexit would significantly influence the course of events in the world. We in Eastern Europe had a clear awareness that we were witnessing a historic rupture, possibly of similar weight to Britain’s decision to stand against the onward march of evil and enter World War II. The case of Brexit has shown that sclerosis can occur in the legal and socio-political system, to the point where formalism can gain dominance over knowledge.

We have asked ourselves, is it really the case that the legal and political system of Britain is so constituted that it does not allow for a change of opinion on a key question? If a decision has been taken under the influence of absurdities and through manipulation of public opinion, must it remain so even if the sky should fall?

Despite the fact that after World War II we have lived in democracy for a shorter time than under totalitarianism, we do understand that social order and efficient national administration require for certain decisions be final.

There can be no meaningful existence, on a personal or social level, without a possibility of rectifying faults.

However, if citizens could never in their lives change their opinions when they learned new and crucial facts and information, if they could never transmit this higher level of knowledge to the reality of their current undertakings – if that were the case, the world of human beings would quickly come to an end. It would mean that whatever had emerged as a result of inaccurate or insufficient information could never afterwards be rectified. But there can be no meaningful existence, on a personal or social level, without a possibility of rectifying faults.

A paradoxical lesson for other countries

Apart from the multitude of perilous and expensive future problems it entails, the threat of Brexit offers a paradoxical lesson for other countries in this sense: rigid defence of “the system”, and of inward-looking interests torn out of context, has flourished at the expense of the opportunity to develop our states and their relationships within the EU in an intelligent and desirable manner.

We are very glad that the ice has broken and that public pressure has been created that the self-regarding, arrogant establishment will not be able to face down. Thousandfold-repeated, rigid insistence on the formal legal fact that a referendum with a valid result has already taken place, cannot continue to be used to ignore the will of the citizens. Today, as the people on the streets of London demonstrated, every person of sound mind and critical intelligence sees clearly that the referendum on Brexit was based on error, insofar as it took place under the influence of inadequate and manipulated information about Brexit and its consequences.

In the name of what?

From our point of view, the result of the vote on Brexit was indicative of an adventure by a jaded society that feels no need for a deeper analysis to clarify the results of such a step. Simply, this was an irresponsible, presumptuous gesture.

And not just that. It is a highly risky, dangerous, reactionary decision, and one which endangers the stability of the western world. A decontextualised, adventurist act, betraying the solidarity in support of our civilisation and values which was built up in the previous century with the sacrifice of countless lives, and especially British lives.

It seemed that instead of continuing to develop and make more effective the most important postwar initiative, to whose existence it contributed much, Great Britain in adventurist mood had turned up its nose at the community which it had spent decades actively building. All of this was betrayed in a self-centred and unintelligently manner. In the name of what? Did the people of the UK perhaps believe that their country would become some sort of independent superpower, which after Brexit would no longer be affected by the problems of Europe or the threatened advance of undemocratic political forces?

Or were there some other reasons which we are not aware of? What are they, for God's sake? Factors which after Brexit would so greatly improve conditions in Britain, and improve the world and relations between its countries, that it would be worthwhile to abandon the project of building the EU and resign from it? Like some bored proprietor of a firm who no longer wants to work and can live henceforward on his savings and spend his time fishing?

Britain is an indispensable part of Europe

If there were no relevant will and activity towards revising the decision on leaving the EU, then the extremists, populists, separatists, useful idiots and common dopes who manipulated public opinion with disinformation, inaccuracies, half-truths and lies, WOULD HAVE WON – and their programme would be carried out.

The crowds demonstrating for the repeal of Brexit have revitalised the legacy of such giant figures as Winston Churchill.

Following the citizens’ bitter realisation that they made an erroneous decision in the referendum announced by the state, and that the state had not protected them by supplying sufficient information and facts about Brexit’s consequences, well-informed and responsible citizens have taken important steps towards correcting the expression of the people’s will. The crowds demonstrating for the repeal of Brexit have revitalised the legacy of such giant figures as Winston Churchill, who bravely and indomitably broke through the rigid “realism” 3 of his time and saved Europe (and with it the world) from the ruinous advance of extremist and populist forces.

We are keeping our fingers crossed for you in your determination to do what is right, Great Britain! Hold firm in expressing your will, because this is the only way to ensure that common sense prevails. Send Brexit off to history and get constructively involved in improving the modern European community, of which your country is an indispensable part!