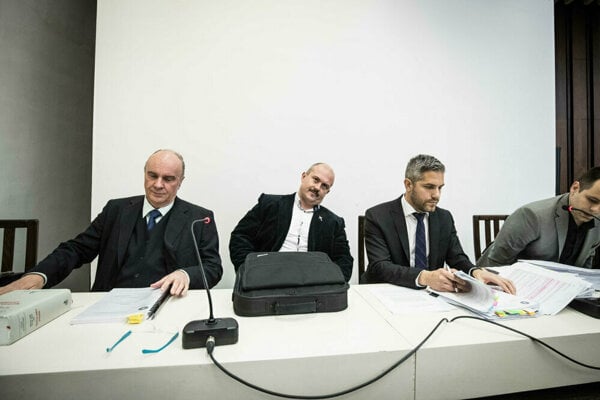 Marian Kotleba and LSNS lawyers in front of the Supreme Court senate deciding about the future of their party. (Source: Sme)
Font size:A-|A+  Comments disabled

Marian Kotleba has returned to the Supreme Court thirteen years after his first political party was dismissed there, this time sporting a more moderate and distinguished image. In 2006, he and his supporters attracted public attention by, for instance, bringing their guns to the court session on their party. This time around they made do without provocations.

Kotleba attended the court session on the General Prosecutor's proposal to abolish his People's Party - Our Slovakia (ĽSNS ), wearing his jacket with a little cross on the lapel, and accompanied with three attorneys of the party.

One hour before the session began, a protest gathering against the abolition of ĽSNS with about 300 people in attendance took place in front of the Supreme Court building. The event was peaceful, with no rows or noisy chants. Kotleba, however, did not give up his rhetoric about "putting Gypsy settlements in order" or about "Gypsy parasites" harming society, or about migrants that need to be expelled from the country.

Read also: Eight reasons why the far-right ĽSNS should be dismissed Read more

He and his lawyers attempted to defend these words in front of the court, and explained why they do not consider them extremist and why he uses them. They read the dictionary definitions of racism and xenophobia to the court, and claimed that their party wants to help everyone, regardless of their nationality or worldview.

"'Black' settlements in our view are a group of many illegal constructions," Kotleba said. He, as well as his three lawyers, kept using the word "Gypsy" and "Gypsy ethnicity" throughout the session.