Grassroots citizens’ movements, the ruling powers as well as competing political parties and figures all clash in the struggle for the interpretation of Kuciak. 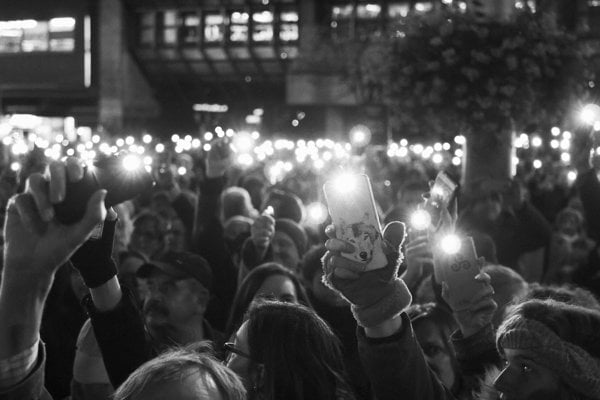 Here is what can be said about the state of the civil society in Slovakia: Everyone is looking for their Kuciak. Ever since the murder of investigative reporter Ján Kuciak and his partner Martina Kušnírová brought more people out to Slovakia’s squares than the 1989 Velvet Revolution protests, various groups have been trying to draw the public attention to the wrongdoings they have suffered.

And to link their new requirements to the issues of justice, rule of law, and new political culture, all under one umbrella term: decency.

In May last year, Bratislavans took to the streets after Henry Acorda, a Filipino employee of a transnational company in Bratislava, died after being kicked in the head. They came out to protest against violence with a racist subtext that occurs in the streets of the capital by night.

Small farmers who have been ringing alarm about their situation for a year now, found their own Kuciak in their murdered colleague, Vlado Rybar. In February 2019, they again drove their tractors to the Danube embankment opposite the Bratislava Castle. There, one of the movement’s spokespersons, Patrik Magdoško, organised a commemorative event.

He performed an old poem, from the 19th-century national-awakening times, calling on Slavs to opt for being something other than a slave. He arranged an instant memorial, complete with a mourning wreath hanging on a tractor, candles, and a political speech calling on people to “not give up their land”. Standing around that memorial, farmers became a community demanding justice, a brotherhood of the determined.

Kuciak’s name was also mentioned in Dobšiná where the local inhabitants held a gathering to commemorate a young man beaten to death by an even younger man, both were locals.

The murderer was a Roma who had a considerable criminal record, and these facts attracted followers of Kotleba’s fascist party to Dobšiná where they repeated their traditional message that the majority in this country is “attacked, offended and murdered”.

Kotleba’s supporters framed the commemoration as an antithesis to Kuciak. When it comes to Kuciak, they regularly ask why mainstream media pay so much attention to a murdered journalist rather than, for instance, a pensioner killed by Roma teenagers.

They demand more attention to the murders that happen in poverty-stricken areas, including the Gemer region, where recidivist Ondrej killed the “decent man” Štefan.

The history of injustice

Since Kuciak, death has become an important part of activism. With it, a dramatic climax returned to the lives of citizens.

It has returned through the collective memory in art: on cinema screens, Slovaks watched the story of police officer Robert Remiáš who was killed in an explosion of his car after he cooperated with the witness of the abduction of the president’s son orchestrated by the government’s secret police. That was back in 1996. 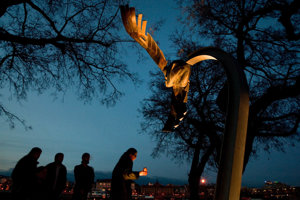 Through a movie, we have also remembered Daniel Tupý, whose murder has never been solved. The student was killed in 2005 on the Danube embankment where Bratislava’s youth used to meet. He was allegedly beaten to death by a group of neo-Nazis with ties to the mafia that enjoyed political cover.

We again discussed the journalists who disappeared: Miro Pejko and Paľo Rýpal. The latter was most likely Slovakia’s first investigative journalist to be killed due to his work, and this was back in 2008. 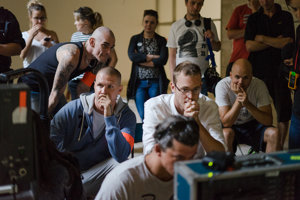 Read also:“By a sharp knife” cuts through the heart of injustice in Slovakia Read more

All these stories had one thing in common: the demand for justice and reconstruction of the society in the way that will prevent violence from happening again; to untangle the criminal networks as well as break the patterns and gangs who produce violence.

These calls necessarily hit the barrier of the establishment that reproduces this state of affairs politically. By not naming them, by letting them happen freely, or even by exploiting them.

The fascists, the Mečiar supporters, the “decent” and the ultraconservatives

The dividing line has been drawn around the answer that Smer, a political party that has been at Slovakia’s helm for over a decade, inherited some of the structures and manners of Vladimír Mečiar’s HZDS and cooperated with the nationalist SNS, “has nothing to do with the murder”.

Even the prime minister of the reconstructed government, Peter Pellegrini, said in his New Year’s speech that Slovakia is divided into two implacable camps. The society is divided into those who complain about the power and those who remain its faithful supporters.

The group that demands a change now includes a variety of concrete political demands. There are people who call for the renovation of institutions – the police, the courts – and, inherently, for the overall restoration of political culture under the slogan of “decency”.

But there are also people who dream about a change that means a return to the isolationism indicative of the Mečiar regime. 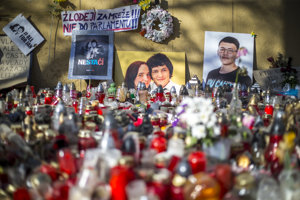 Then there are those who believe that all the ills we are suffering from are the defining qualities of democracy; therefore, we need to get rid of the whole system and move towards something else, possibly with a different geopolitical centre of gravity.

Activism and civic movement are apparent in every one of these groups. We can see the return of Mečiar folksiness, when presidential candidate Štefan Harabin drove on his old Karosa bus and promised people gathered in the rural community houses that he would guarantee justice personally, against the background of Slovak folk songs that the locals played on their accordions.

We saw activists from the For a Decent Slovakia movement roving the regions of Slovakia in a minibus, to encourage local activist cells, and to talk to people about the importance of the presidential election.

And we saw the fascists from Kotleba’s party abuse the religious sentiments among the common folk, to spread the ideas of “traditional values” that the liberal West is allegedly subverting with the help of its alleged agents. Alongside these voices, the ultraconservative activists from the Alliance for Family and preacher Marián Kuffa with his brother, the founding member of a new party leaning to the far right, continued their rants about abortions and a halt to “LGBT agenda”.

The ruling Smer party exercised activism of its own, when it filled stadiums with its female supporters to celebrate the International Women’s Day. In it, they continued the tradition of something like the 1970s normalisation folklore, in which the socialist holiday meets the conservative claim about the “traditional role of women”.

During the long year that followed after the death of Ján Kuciak, these political fiestas shaped the political landscape. Civil society took political topics for its own, in spite of the ruling parties’ calls that the streets shouldn’t be political arenas.

With an unprecedented intensity we have heard and felt that the power indeed comes from the people. In the elections, they only lend it to the elected politicians, but once the people’s trust is exhausted, citizens will loudly demand their power back.

Party cartels have been used to keeping power in their hands, using social policies and determined campaigning. From their viewpoint, civil unrest appears to be a threat. The demonstrations of teachers before the 2016 elections disturbed them, as did the protesting farmers in 2018. 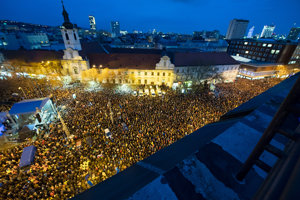 Read also:Massive gatherings remember Kuciak and Kušnírová: We did not forget! Read more

They haven’t been able to understand the protesters’ efforts beyond the only explanation they could come up with – that the protests were a mere opposition-driven propaganda, with one and only aim: to strip them of “their” power.

In a similar manner, the ruling power has cultivated its over-sensitivity to criticism from journalists or evaluation from NGOs. Ruling politicians insist that criticism only comes because those who are serving it are on the opposition part of the spectrum, and therefore, they “harm the government” and “badmouth Slovakia abroad”.

That is the optics through which the ruling politicians see the movements in the society. They suspect that they are the victims of a Slovak version of the Maidan. One that the billionaire philanthropist with an interest in the post-socialist region, George Soros, has orchestrated as his “colour revolution” here. They used the vocabulary of Yanukovych and Orbán to explain to their electorate what the active citizens really were after. 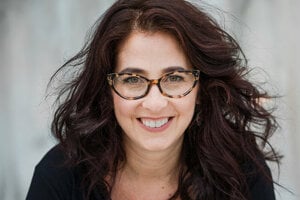 They have even borrowed from the far right in their fight against Marrakesh and Istanbul, two international agreements that they have dressed in a legend about the destruction of traditional family and an exchange of the population for a Muslim one. Dancing this peculiar dance, the establishment got closer and closer to the anti-system – the coalition emerged as a “dam against extremism” – and in the end it merged with an anti-system on these points.

Despite declarations how much the ruling Smer would like, with the help of its presidential candidate Maroš Šefčovič, to modernise Slovakia, they have always been better suited to get in tune and get a deal with anti-modern, nostalgia-stricken politicians. Even in their fight against the modernisation forces that stood on the squares, calling for justice and rule of law.

The grassroots citizens’ movement, the ruling power, and its political competitors, clash in a fight about the interpretation of Kuciak. It is a clash of opinions about what needs to change in order for this never to repeat again.

Mapping the civic energy is an answer to the objection of politicians who say that the streets should not trifle with politics. They say we’ve got elections for that, for citizens to choose their representatives.

At the same time, we have also heard a popular objection (borrowed from the anti-system) that NGOs are also not to deal with political topics because they do not represent the authentic interests of citizens, but rather a “foreign” agenda nourished from abroad.

Politicians now mind the professionals from NGOs, because they are professionals. They demand them to be more transparent, or not enter politics at all. On the other hand, they also consider it a problem when crowds take part in political life spontaneously, when they gather in reaction to an event, and lay out their demands.

In the end, it appears thirty years after 1989, even political parties could get used to the fact that they are only co-participants in the political life, rather than its monopoly owners. That the power comes from the people and that politics belongs to everyone. This is what the people came to tell them in the squares after Kuciak’s death.

This article was originally published by Visegrad/Insight.