Slovakia mourns with Paris over the tragedy in Notre Dame

Slovak officials respond to the fire at a Parisian landmark. 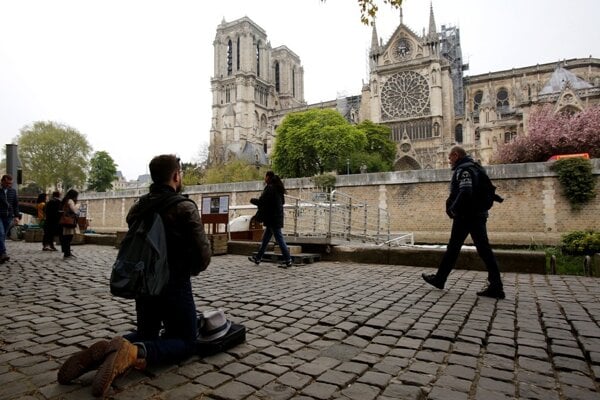 Man kneels as people came to watch and photograph the Notre Dame cathedral after the fire in Paris, April 16, 2019. (Source: AP/TASR)
Font size:A-|A+48

President Andrej Kiska sent a condolence telegram to his French counterpart Emmanuel Macron in response to the April 15 tragedy in Paris, where one of the city’s landmarks, the Notre Dame cathedral, caught fire.

“The destruction of Notre Dame caused by fire is a national tragedy that struck not only the French people, but also all Europe and the world,” Kiska wrote in a Facebook post. “It’s as if the millions stories of all of us who could have touched this sacred place have died.”

He expressed the hope that the cathedral will be soon rebuilt to its former glory.

“I will gladly join the national collection President Emmanuel Macron has announced,” the president added.

“I am heartbroken by the sight of Notre Dame Cathedral burning,” she wrote on Twitter. “Slovakia stands with Paris and France tonight.”

A big loss for France

PM Peter Pellegrini (Smer) expressed his grief over the tragedy as well. All damage caused by nature is regretful, particularly when fire consumes invaluable historic and cultural treasures.

“I feel extremely sad seeing the famous Parisian cathedral Notre Dame on fire and my thoughts are with the French people,” he wrote on Facebook.

“Our hearts break on seeing Notre Dame burn,” Foreign Affairs Minister Miroslav Lajčák (Smer nominee) wrote on Twitter, adding that all humanity is at a loss. “We mourn with Paris and thank those who bravely fought the flames.”