The story of the man who embodied new journalism in Slovakia

Images from the history of the Sme daily: Karol Ježík, the first editor-in-chief. 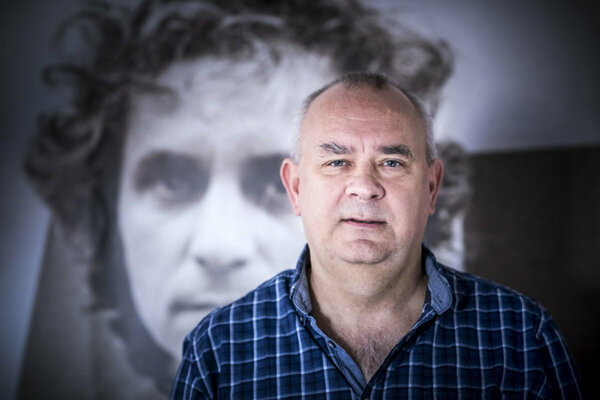 Alexej Fulmek, with the picture of Karol Jezik in the background. (Source: Sme)
Font size:A-|A+6

Karol Ježík was generally considered a good-looker, with his gentle boyish eyes and his rich mane that went grey too early.

He was slim, even though he did not do sports very much. Despite his boyish appearance he was our clear leader, he attended TV debates, he was self-confident, smart, and quick. He earned his legitimacy with his deeds. He could formulate an inventive and surprising idea. He quickly established himself as one of the exceptional personalities of the developing democratic journalism.

Since there were no significant authentic paragons in Socialism-damaged Slovak journalism, we needed to make them, at times when ethical limits started emerging and the media were high on the euphoria of free communication. The story of Karol Ježík is, to a large extent, the story of how new, independent, and economically prosperous journalism was born in a post-totalitarian Slovak society. His name is now an indelible part of the country’s history.

Ježík was first choice for the top editorial job

Ježík studied economics in Prague, but never graduated. A native from the village of Modranka, now part of Trnava, he worked in a Trnava-based printing house and later made his way to the sports desk of the Czechoslovak Press Office. He graduated from Comenius University’s journalism school as a working journalist. He was 14 years older than me, but he had only joined the editorial of Smena three years before me.

That was enough for him to work his way up to becoming one of the brightest personalities of the editorial. That was also why he became the deputy editor-in-chief, after Chorvatovič chose him for the post, just like Karol later chose me.

It was his natural authority that made him first choice for the post, as well as his professionalism and the power of his personality. Ježík brought to Smena the new spirit of independent, critical journalism not bound to any concrete political party, but harboured higher ambitions – based on precise journalistic work with facts and information. He would often say he wanted us to work on our critical thinking: “I don’t want us to be an opposition newspaper, I want us to be a critical newspaper.”

Under Ježík, Smena started becoming a real western-type newspaper. His main practical assets were his ability to edit texts quickly and to come up with attractive headlines. He could make fast decisions and he was uncompromising when rewriting texts that did not reach a good-enough level. He had some kind of gift to immediately discover spelling mistakes and factual inaccuracies in texts, letting the writer know that he did not like that. 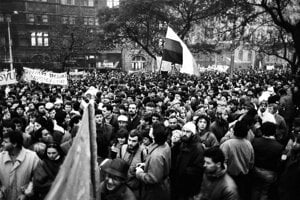 For me, Karol Ježík was first and foremost my friend. Together we experienced the biggest adventure of our lives. We lived through a unique story. We used to go for a beer together on the weekends, dreaming of a big newspaper, while our wives got angry at us for not spending at least our Saturdays at home. And then on Sunday, the week-long work began again. It never occurred to me that our joint journey through life would be so short.

How I went from culture editor to war correspondent

I was 24 years old and I mostly covered literature. I would meet writers, discuss their work and the existentialist dimension of life with them, I would listen to the boring and, at times, exciting talk of young rebel poets in the U Michala café near the University Library.

I easily penetrated the most intimate parts of the Slovak bohéme. I interviewed artists. The ones I remember most are the Oscar-winning director Elmar Klos (who directed The Shop on the Main Street), the songwriter Bulat Okudzava, and Yevgeni Yevtushenko during the coup in Moscow; as well as Arnošt Lustig, a nice and optimistic gentleman who managed to escape from the death transport from the Buchenwald concentration camp, and who used to say that everyone who survived carries the camp within themselves.

My days passed from my first morning coffee in the editorial room up to the final beer in the Writers’ Club or at the U Michala café, which was a phenomenon of its time, a place where artists went to talk and drink. Everyone who meant anything in the world of literature was there. Rudo Sloboda, Vinco Šikula, Dušan Mitana, Ivan Kolenič, Miloš Žiak, Marián Kubica, Jožo Urban, Táňa Lehenová, Kamil Zbruž, Andy Turan, Ján Litvák, Maroš Bančej, Karol Pém, Verona Šikulová, Oto Havrila and my wife Denisa, as well as scores of young fine artists. They met here to practice their wits in the uncompromising clashes of words that destroyed feeble characters. I felt it was becoming monotonous for me, and I felt the never-ending drinking was physically draining me, also in terms of my existence.

And so I gradually went from a culture desk reporter to a war correspondent. Having a Russian mother, I spoke excellent Russian, and the former Soviet Union was convulsing in war conflicts after it fell apart. The dangerous job of a war correspondent offered a chance that appeared attractive and meaningful. Wwe started mapping out war conflicts in the former East Bloc directly in the field, and I got to like this job.