The parliament only elected three candidates for Constitutional Court judges

MPs still have to elect seven more to submit enough candidates for the president.

Although the parliament was supposed to elect 10 candidates for the vacant Constitutional Court judge posts, it chose only three. This happened despite the negotiations between the coalition and opposition held prior to the vote. 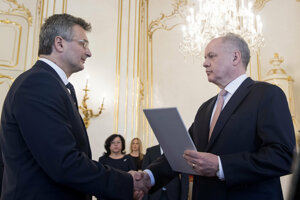 In the previous two votes, held in February and early April, only eight candidates were elected. Nonetheless, the February election turned out to be unsuccessful with no candidate being chosen.

Currently, there are seven Constitutional Court judges, with the court being presided over by Ivan Fiačan. Six judges are still missing.

Since the president is supposed to choose the judges from twice as many candidates, the parliament is expected to elect seven more. The second round will take place on May 22.

Prior to the vote, Martin Glváč of Smer said that they would try to elect all 10 candidates.

“Our caucus consider the vote on the candidates for the Constitutional Court judge extremely important,” said Alojz Baránik of the Freedom and Solidarity (SaS) party, as quoted by the SITA newswire.

In the May 21 vote, SaS agreed to support 10 candidates the party had discussed with the coalition. SaS even published those names. However, the parliament elected only two of those candidates, namely Tomašovič and Vernarský.

The opposition will hold talks on the support of other candidates on May 22 when the repeated vote is held, SITA wrote.

All the applicants who were not successful in the vote on May 21 will be reconsidered in this vote, the TASR newswire reported.