Some Russian politicians are trying to justify the 1968 invasion. What is Slovakia's response?

PM Peter Pellegrini wants to discuss the recent initiative of the Russian Communist Party during his visit to Russia on June 5-6. 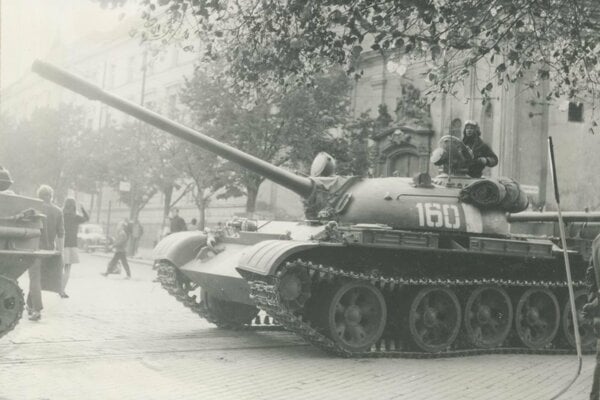 One of the topics Slovak PM Peter Pellegrini (Smer) and Russian President Vladimir Putin plan to discuss during their upcoming meeting is the legislative proposal due to be debated in Russia’s State Duma that would effectively legitimise the 1968 Soviet-led invasion of Czechoslovakia.

The purpose of the invasion was to suppress its reform movement.

“The military invasion and subsequent 20-year occupation of former Czechoslovakia was a serious violation of international law,” reads the statement provided by Pellegrini’s spokesperson Patrícia Macíková for the SITA newswire. “Both Soviet and Russian representatives have gradually distanced themselves from this illegal act in the past, and they have officially apologised to both Czechs and Slovaks for this historical injustice.”

Pellegrini will meet his Russian counterpart Dmitry Medvedev on June 5. He will meet with Putin shortly after, SITA wrote.

His visit to Russia has been planned for some time and has nothing to do with the recent initiative of the Communist faction in the State Duma.

What is the proposal about?

The Communists organised a roundtable discussion on May 30. A proposal to grant the status of war veterans to Russian soldiers who took part in the invasion was the focus of the discussion.

The meeting, held at the initiative of Communist MP Yuri Sinelshchikov, who was also involved in the invasion, was attended by representatives of all parliamentary factions, the Russian Foreign Ministry and several other bodies, the TASR newswire reported.

The bill was backed, among others, by first vice-chairman of the State Duma’s Security Committee Alexander Sherin of the Liberal Democratic Party of Russia, and member of the Security and Anti-corruption Committee Nikolai Ryzhak of the A Just Russia party, TASR wrote.

If the law is adopted, it would officially support those who refer to the 1968 invasion by the Warsaw Pact armies as a legal action, the Czech Forum24 website reported.

What is Slovakia's response?