Pellegrini will not travel to Normandy although British PM Theresa May addressed him earlier than when he received an invitation from Moscow. 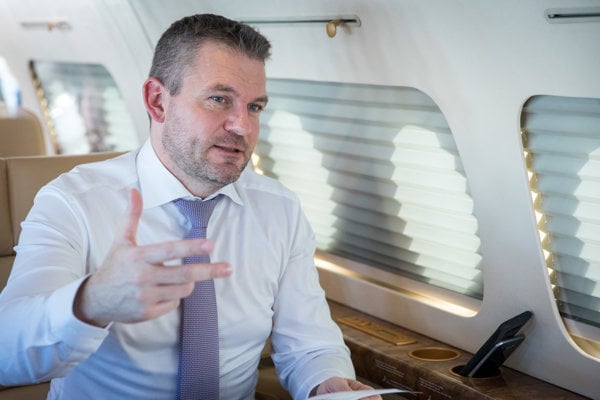 Slovak PM Peter Pellegrini (Smer) will not travel to the French region of Normandy, where the world will mark the 75th anniversary of the start of Operation Overlord during World War II, commonly known as D-Day.

At the time, he will be visiting Russia.

Although the invitation from British PM Theresa May allegedly arrived sooner than the one from the Kremlin, Pellegrini travelled to Moscow instead, where he is to meet Russian President Vladimir Putin, the Denník N daily reported.

Read also:Andrej Danko: I will not renounce Russia Read more

As the daily pointed out, the Slovak PM did not even tell the truth at first, since he said on the Na Telo political programme on the private TV Markíza network that it was not him who had been invited to Normandy but President Andrej Kiska.

“PM Peter Pellegrini has received the only invitation for Slovakia to celebrate the landings of the Allies in Normandy,” said the president's spokesperson Roman Krpelan, as quoted by Denník N.

Since Pellegrini is not coming, Slovakia will be represented by Richard Raši, a deputy PM for investments and informatisation. He will sit next to world leaders, including German Chancellor Angela Merkel and US President Donald Trump, Denník N wrote.

Although Pellegrini has meanwhile admitted that he was, in fact, invited to Normandy, it is not clear which of the two invitations arrived first.

“Given the fact that it [May's invitation] came only after the Government Office confirmed the visit of the Slovak PM in Moscow,” said Pellegrini's spokesperson, Patrícia Macíková, as quoted by Denník N, “the Government Office then checked at the Presidential Palace whether the president could represent the country at this event.”

However, when the invitation from the Kremlin arrived, Pellegrini had already confirmed the visit to Normandy. Hence, he asked Kiska to help him solve the situation, Denník N reported.

SaS: A win for Russia's diplomacy

“The government has sent out a message to the EU and NATO that its priorities are in Moscow,” said SaS head Richard Sulík, as quoted in the press release.