Winter joys - as the Brussels Town Hall calls the traditional Christmas market and the decorations associated with it. 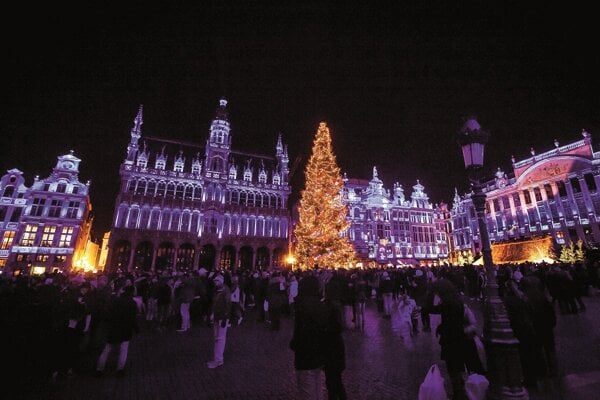 Visitors to the Grand Place in Brussels will be able to see the illuminated Christmas tree from Slovakia.
Font size:A-|A+

This year, they are dominated by a 22-meter fir that has been brought to the European Union's capital from the Little Carpathians.

The Slovak Ambassador to Belgium Stanislav Vallo came up with the initiative. He also addressed Brussels officials this summer. It is a gift from the Slovak Republic to both the citizens and visitors to the city reminding them of our Presidency of the Council of the European Union. The tree was secured thanks to support from the Ministry of Foreign and European Affairs of the Slovak Republic and the Ministry of Agriculture. It comes from private land where it had begun to threaten a nearby building where it grew.

The Christmas fir went on an arduous journey from the Slovak village of Horné Orešany near Trnava. It was cut down on November 14, and erected at the Grand Place in Brussels, Grand Place, on November 17th. The oversize cargo was transported by a Belgian company operating in Tornali. The decorated tree was lit up on Friday

November 25th. The Christmas market with it’s seasonal decorations will continue in Brussels until the end of 2016.