Komárno and Komárom joined by a new bridge

The joint project of the two countries is funded with a contribution from European Union funds through the Connecting Europe Facility. 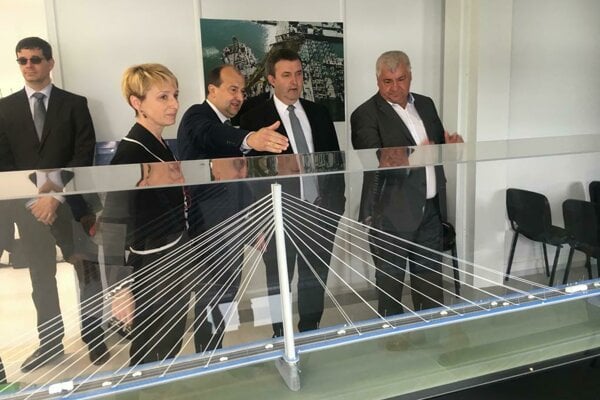 Hungarian Minister of Innovation and Technology László Palkovics (second right) and Slovak Minister of Transport and Construction Árpád Érsek observing the construction of the new bridge in Komárno.
Font size:A-|A+

Slovak Transport and Exhibition Minister Árpád Érsek, together with Minister of Innovation and Technology of Hungary László Palkovics, checked the construction of a new road bridge over the Danube last Tuesday. It will connect Slovak Komárno with Hungarian Komárom.

The joint project of the two countries is funded with a contribution from European Union funds through the Connecting Europe Facility. “After last year's moderate delays, construction work is currently underway. Together with the Hungarian side, we will do everything we can to start serving the public with this bridge next year, ”said Minister Árpád Érsek after visiting the site on both the Hungarian and Slovak sides.

The new two-way line will be 200 meters higher than the existing railway bridge. Currently, only the Elizabeth Bridge dating from 1892 is accessible for passenger car traffic in Komárno.

The new bridge will be asymmetric with one pylon having a height of about 90 meters with suspension cables. At the moment, artificial islands are being used for the pillars. There will be a main road with two lanes crossing the bridge. It is to be followed by main driveways that each country will build themselves. On the Slovak side we are building a 600-meter road section with two lanes connected by a roundabout to the I / 63 road. Construction works are in line with the schedule, their completion being tied to the finishing of the bridge body.

The total project budget is over € 117 million. Slovakia has received more than 47 million from EU funds, while Hungary can count on a contribution of more than 52 million euros.

They will also build a bridge over the Ipeľ

Both ministers also signed a joint agreement to build a bridge in Ipeľský Předmostí during a joint meeting. Between the municipalities of Ipeľské Predmostie and Drégelypalánk this will promote cross-border cooperation, free movement of people for work or study and contribute to the overall development of the region.

They are building it on the site of the original bridge that was destroyed during World War II. It will be designed for international passenger and freight transport up to a maximum total weight of 3.5 tonnes, but also for pedestrians and cyclists. The estimated costs for the Slovak Republic will be almost EUR 1.3 million. The financing of the bridge construction is planned from the Interreg V-A cross-border co-operation program Slovak Republic - Hungary 2014 - 2020, from the state contribution and from sources of the Banská Bystrica self-governing region.