Africa on Pioneers: How 5 Slovak adventurers fulfiled a dream

The film maps the story of them and their Pioneer motorbikes, all the way from Banská Bystrica down to Africa. 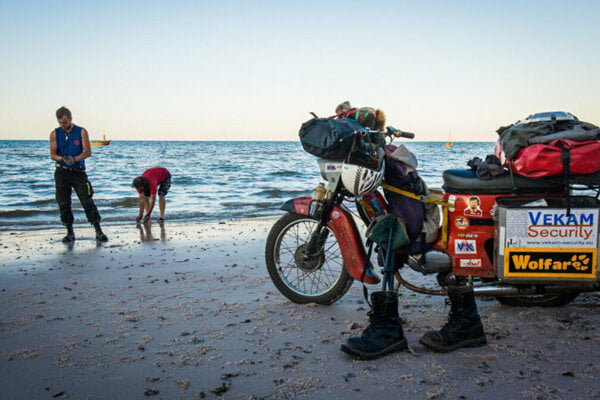 “We wanted to become bikers when we left school,” said traveller and adventurer Marek Slobodník. “But we did not have motorbikes, or cash.”

For a while they could only watch jealously, as bikers rode past waving at each other.

So they got their bikes and rode around Slovakia. A year later, they travelled beyond the borders, visiting Romania and Kazakhstan. But once they began to travel and explore the world, they wanted more.

“We then decided to head out for Africa,” he added.

They rode the old Pioneer motorbikes, made in the 1970s, through Israel, Egypt, Sudan and other countries, finishing at the Southernmost tip of Africa, the place where the Atlantic meets the Indian Ocean.

The film about their adventurous road trip to Africa comes to cinemas on September 5. Before that, it hits several open-air theatres during the summer.

It all began on a snowy morning on June 14, 2017. A group of five motorbikers set out from Banská Bystrica in central Slovakia. Families, fans and the media came to wave them goodbye.

They had more than 15,000 kilometres and 150 days of travel ahead of them. They were passing the second kilometre of their long ride when one of the motorbikes broke down. In fact, they all broke down at various stages before they reached their final stop.

Yet the film, Africa on Pioneers, is not about the old motorcycles but about freedom.

“When a man rides a motorbike, even if it is a slow Pioneer, he feels free,” Slobodník said. You cannot get that feeling in a car, he opined.

Slobodník did not mind that their Pioneers could only reach 40km/h following the 400-km long straight through Sudan.

“I enjoyed the fact that my phone did not ring and I was surrounded by nothing more than desert,” he said. 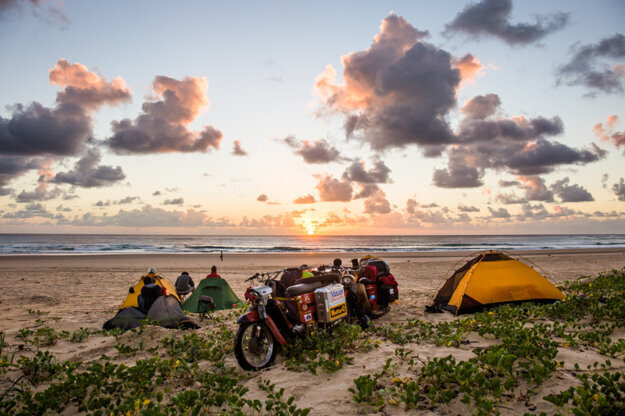 They slept in tents most of the time. (Source: Marek Duranský)

The group did not have any fixed itinerary. They just wanted to escape from the daily stereotypes and live their lives.

“Stereotypes kill us and our lives run so fast because of them,” Slobodník said.

Nonetheless, not everything was that simple and romantic on their five-month road trip around Africa.

They began to get ready for their trip six months before they got going with the itinerary, vaccinations, visas, travel permits, ship tickets, and making sure their motorbikes were in good technical condition.

For example, cameraman Martin Kochaník had to carry 70kg of technical equipment and other luggage on his Pioneer. The loaded motorbikes had a top speed of 43km/h on flat ground.

As there is no ferry sailing between Europe and the eastern part of Africa, the group of friends had to find another way to get there. In the end, they managed to get transport from Italy to Israel on a cargo ship.

It was reportedly sheer luck that they were allowed to take the motorbikes aboard.

When they arrived in Israel, they had their memory cards formatted and were questioned for hours. Following that, they spent two nights at the border with Egypt until the moment they were allowed to enter the country, accompanied by military staff.

“Our good luck was that a folding drone was a novelty on the market,” Kochaník said. The group were probably the first in Czechia and Slovakia to have one.

If they had had a normal drone, the Egyptians would probably have confiscated it. As a result, they would not have had any drone shots in their film.

Slivovica, a fruit brandy made of plums, was not a problem though and came in handy. One time they wanted to visit a Safari Park but they were not allowed to enter it with their motorbikes so they exchanged the Slivovica for a car.

They even brought one Slivovica bottle back home.

While in Africa, the Slovak travellers had to deal with heatwaves, rainy seasons, intrusive flies and a lack of petrol.

They also ended up in prison in Ethiopia. Yet, it was not the type of prison we know in Europe. The African prison rather resembled a guarded settlement.

“The armed men who arrested us in Ethiopia eventually helped us,” Slobodník said. Although many of them scared us, saying the trip would be filled with dangers, it was not, he added. 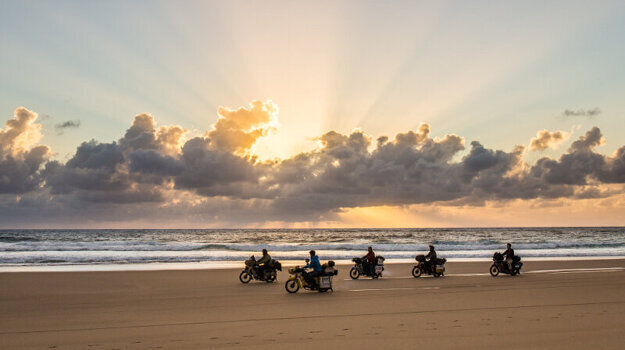 The five boys had to face several challenges in Africa during their journey. (Source: Marek Duranský)

The bikers slept in tents under the sky most of the time but they had to deal with some health issues; one of the boys burnt his leg on an exhaust and the wound became inflamed and shortly before they reached the finish, two of them suffered from malaria and ended up in a local hospital.

Yet the story finds a happy ending at the most southern part of Africa – Cape Agulhas. From there, the travellers moved to Cape Town and prior to getting on board a plane to Europe, they loaded their Pioneers into a shipping container.

And what happened to the faithful Pioneers? Two are in a museum, one was redesigned, and two are fully operational.