Exhibition unveils the secret of a vintage portrait

Prešov’s collection is a treasure among the European collections of Judaica. 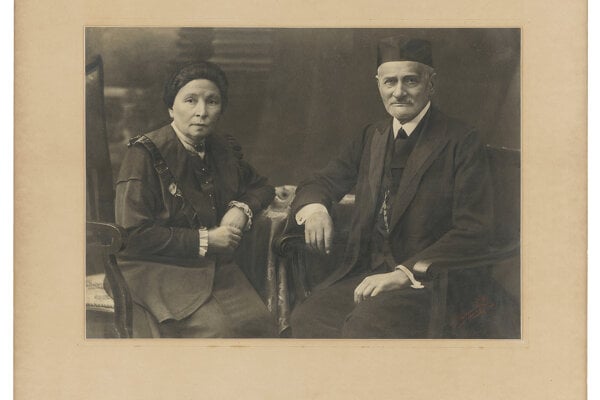 A large vintage gelatin silver print photo of a Jewish couple caught the eye of curator Jana Švantnerová as she was browsing through hundreds of items in the collection of the Jewish Museum in Prešov. She had no idea who the people were, but she immediately recognised the logo of the Béla Mindszenty prominent studio in then Pressburg, nowadays Bratislava, in its lower right corner.

“It struck me immediately: how did this double-portrait from Bratislava reach the collection of the museum in Prešov and who is the couple?” Švantnerová explained why she chose this photo for the Treasures of the Jewish Museum in Prešov exhibition, hosted by the Jewish Community Museum in Bratislava.

Lucia Almášiová, an expert in 19th century photography from the Slovak National Gallery (SNG) contacted Elena Kurincová from the Bratislava City Museum. Some years ago, Kurincová curated an exhibition on the studio of Béla Mindszenty. Historian Štefan Holčík saw the 1918 photo on her table.

“They are the Sonnenfelds,” Holčík immediately solved one part of the puzzle. He even remembers the small photo this reproduction might have been made from. Nevertheless, he does not know how it got into the collection in Prešov in eastern Slovakia.

The image depicts a representative of the Orthodox Jewish community in Pressburg,

Siegmund Sonnenfeld, and his second wife Katharina. It is an enlarged reproduction of an older photo, as indicated by the word “Reproductión” in the left corner. Sonnenfeld died in 1892. 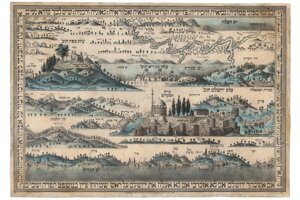 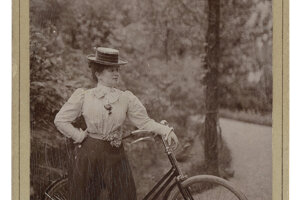 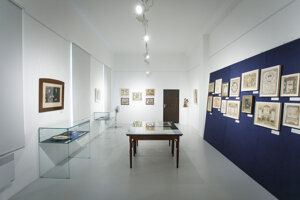 Treasures of the Jewish Museum in Prešov (12 photos)

“It fascinates me that by choosing it for the exhibition, we helped identify the couple,” said Švantnerová. “Moreover, we not only found Sonnenfeld’s grave in Bratislava but we also paired this item with a prayer book of Irena Suchý, a descendant of the Sonnenfelds.”

The book is exhibited in the Jewish Community Museum in Bratislava.

The image of the Sonnenfelds is one of 70 items Švantnerová chose for the exhibition symptomatically named Treasures of the Jewish Museum in Prešov. It is a follow-up of last year’s exhibition that paid tribute to the builder and collector Eugen Bárkány. He was not only instrumental for the establishment of the Jewish Museum in Prešov but after he was expelled from this eastern Slovak town following WWII, he collected Judaica, i.e. objects used by Jews, in Bratislava.

Exhibition of Treasures of the Jewish Museum in Prešov

The current exhibition will be followed by two more, in 2020 and 2021. They are the result of a research, documentary, restoration and publishing-exhibiting project focusing on the most endangered items from the collection of the Jewish Museum in Prešov.

“We started this project with the plan of restoring chosen items and introducing them to the general public and experts,” Maroš Borský, director of the Jewish Community Museum, told The Slovak Spectator.

Along with Švantnerová he considers Prešov’s collection a treasure among the European collections of Judaica.