Čaputová: I will not be silent when we act against EU and NATO interests

President received Slovakia's ambassadors from around the world in her palace. 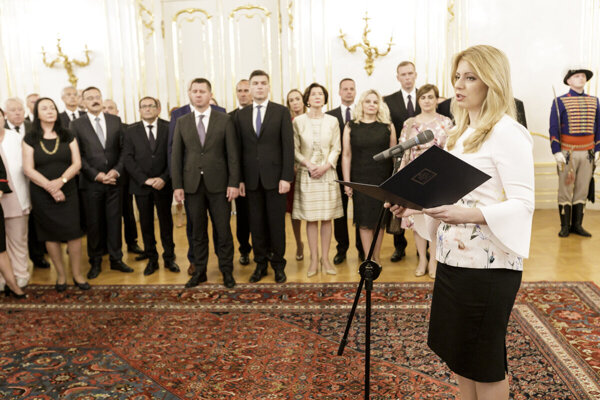 Slovakia and its diplomacy must be very clear in supporting values that make the country a reliable partner within the EU and NATO.

That was the message from the Foreign Ministry and from President Zuzana Čaputová to Slovakia's ambassadors from around the world upon meeting in Bratislava in early July.

"I want Slovakia to be perceived as a self-confident country with clearly defined values," President Čaputová told the diplomats in the Presidential Palace, as quoted by the TASR newswire. She stressed that she wanted the Slovak diplomacy to be respected and at high quality.

"I will not be silent when our values are disrespected, or when we will send chaotic signals from Slovakia, or when we will act against our interests as an EU and NATO member," the president said. She added that she expects the diplomats to do the same.

Čaputová repeated that she wants to focus on environmental issues, justice, rule of law and human rights in foreign policy as well.

The president cares about good relations with neighbours and she supported the Visegrad Group's cooperation. The cooperation is still needed, but it should never be promoted at the expense of freedom, including media freedom or academic freedoms, Čaputová said.

The president addressed the relations with Russia and admitted that she sees no interest in this country in leading an open dialogue with Slovakia.

The Foreign Ministry's State Secretary, František Ružička, stressed in his speech to the diplomats that Slovakia must definitely support the fundamental values of Euro-American western civilisation. It must also be able to defend its interests and the interests of the EU and NATO, he said as reported by TASR.