It has surprised even experienced speleologists. 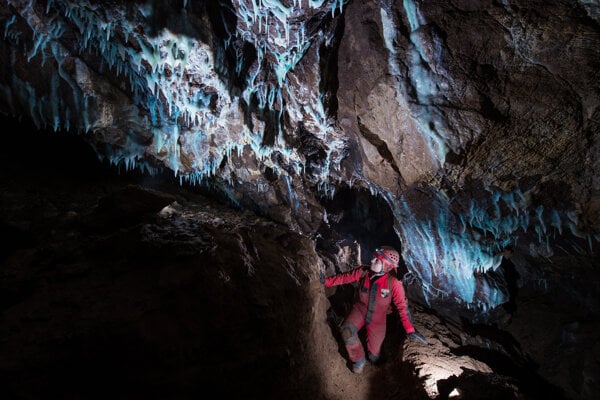 There is no illumination, and neither is the water surface the cause of its mystical colours. The cave at Malužiná is truly blue and green. The blue colour of the cave is a rarity in Europe and only a few others have been discovered, regional website My Liptov reported. Experts talk about the Blue Cave as one of the most beautiful discoveries of its kind although, as they say, every cave has its charms.

It was discovered in 2016 when the Červené Vrchy speleological club was attempting to make Malužiná cave accessible on the left side of Bocianska valley. They were also attempting to make it accessible to the general public. Although this is difficult, they hope one day to succeed. Part of the exploration at Malužiná is also looking for new caves, so the speleologists also explored the right side of the valley.

“The best time to look for new places is in extreme weather conditions, when it is minus thirty or plus thirty outside,” said Ján Šmoll, a speleologist from Speleoclub Červené Vrchy, as quoted by My Liptov.

When it is frozen outside, the snow around the entrance to a cave melts because of the warm air coming from it. Conversely in hot weather, there is cool air flowing from underground. The airflow indicates the presence of a cave space.

This combination of extremes and the senses of the speleologists led them to the underground massif located under a quarry that produces stone for construction.