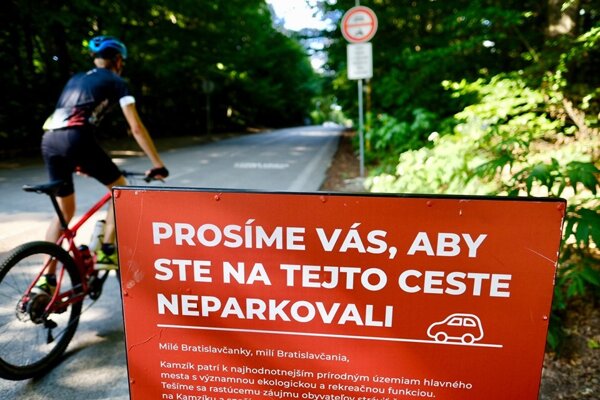 The Kamzík area in the Small Carpathian mountains just above Bratislava is one of the most popular recreational zones in the district. The problem is that a lot of visitors, instead of taking public transport or walking, use their cars to get there. They park in places where parking is prohibited, becoming not only a burden to traffic, but also devastating nature. Bratislava city council is promising activities to eradicate this negative behaviour.

“Kamzík is one of the most valuable natural areas of the capital, with significant ecological and recreational functions,” wrote Mayor Vallo on Facebook, adding that the city council is striving to meet the increasing demands for protection of the environment, pedestrians, the safety of cyclists, as well as for limiting car traffic in this area. “Therefore, in the coming days, we will begin to tighten traffic regulation.”

The municipal police will start by checking more frequently for vehicles parked outside official parking places. Firstly, they will only give drivers a warning; later on they will treat parking in undesignated areas as a traffic offence.

Vallo points out that drivers can park their cars on the way up to Kamzík at the official parking place in front of the Stroodel restaurant, on the edge of the widened part of the asphalt road between Stroodel and Kamzík, on the hard surface at the turning to the TV tower and at the bend under the TV tower.

The city council is also calling on visitors to use public transport instead of their cars. The trolleybus 203 goes to the area on work days as well as at the weekend as far as the stop Koliba. The e-bus 144 running at 15-minute intervals takes visitors from Koliba up to Kamzík during the weekend.

Kamzík, a 439-metre hill overlooking Bratislava, has given its name to the whole recreational area. Standing just below the hilltop is the 70-metre television tower with a café and a revolving restaurant offering a panoramic view while dining. The TV tower is one of the symbols and a landmark of the capital.

The recreational zone also features the Koliba Expo, a bobsled run, a ski lift, a number of cabins and a chair lift from Železná Studnička.