Food prices in Slovakia have grown the most in the EU

The Agriculture Ministry blames the traders, but traders say there are several reasons for the price increase.

Slovakia overtook the rest of the EU in June when its food prices saw the most dramatic increase. Food prices on the shelves of Slovak stores increased by 0.5 percent, the SITA newswire reported.

“Food prices in Slovakia rose the highest of all Visegrad Group countries in June,” said Agriculture Minister Gabriela Matečná of the Slovak National Party (SNS), as quoted by SITA.

At the same time, the price increase does not reflect the prices at which retail chains purchase food from Slovak suppliers. Suppliers, on the other hand, are pushed to discount their prices over the long term, which prevents them from investing sufficiently in new technologies, giving fair pay to their staff and covering the growing prices of raw materials, Matečná continued.

“Again, it is confirmed that traders abuse their dominant power at the expense of consumers and suppliers,” Matečná added, as quoted by SITA.

Prices of pork and fruit rose the most 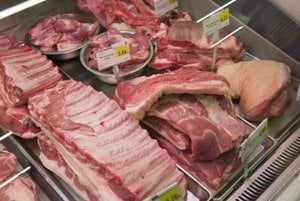 As for the V4 region, Poland placed closely behind Slovakia with a 0.4 percent increase, followed by the Czech Republic with a 0.1 percent increase. In Hungary, food prices even fell by 0.2 percent.

“We are witnessing the price increase despite the fact that several chains announced a long-term price freeze or even decrease a few months ago,” said Milan Lapšanský, head of the Agriculture Ministry’s food industry and trade section, as quoted by SITA. “Today we see that those were only empty promises.”

Slovaks paid the most for pork meat and fruit, whose price went up by 7 percent. In the EU, for example, the price of fruit rose by only 0.7 percent on average, the TASR newswire reported.

The Agriculture Ministry also said it would like to check the economically justifiable costs. The reason is that suppliers often complain that traders force them to sell food for prices below the production costs, as reported by TASR.

Traders disagree with the criticism

The Slovak Modern Trade Alliance (SAMO) does not understand the continual attacks of the Agriculture Ministry. The prices are affected, among other things, by the legislative environment, which is affected by the ministry, the government and the parliament - not the traders.

In addition, the prices of energy has increased a lot since the beginning of 2019, while the surcharges for working at night, during weekends and on holidays have gone up, too. The minimum wage rose as well.

“These measures increase the costs of not only traders, but also farmers in Slovakia, which subsequently have negative consequences on customers,” said Martin Krajčovič, head of SAMO, as quoted by SITA.

He added that the traders are the ones who have been pointing to the negative impacts of state interferences that may result in the increase of food prices.