There is a plan to connect the entire periphery of the former quarry with the tourist path. In an attempt to increase the touristic attractiveness of the Lake Beňatina locality in Sobrance county, there is a new lookout platform, paths bridging inaccessible parts and basic touristic infrastructure.

There is a plan to connect the entire periphery of a former quarry with the tourist path as well as build a new lookout point, said Lenka Vargová Jurková of Košice Region Tourism (KRT). 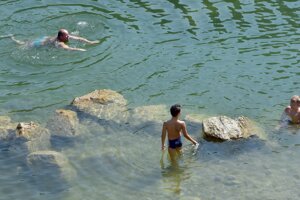 “The lake at the Beňatinský quarry is becoming more attractive for visitors and we see an increasing tendency in the long-term,” she said, as quoted by the TASR newswire.

KRT decided to develop the surrounding area. They made the place more accessible and built basic touristic infrastructure. Tourists have new paths, a lookout, benches, trash bins, information tables and an InfoPoint.