ĽSNS supporters disrespected the calls of the organisers not to display political advertising. 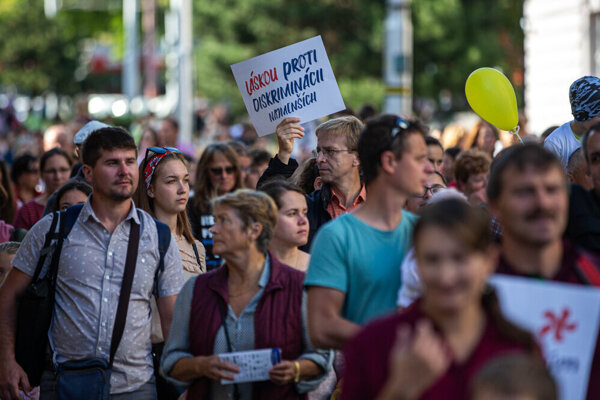 The pro-life march participants protested against what they call "the discrimination of the little ones". (Source: Sme - Marko Erd)
Font size:A-|A+  Comments disabled

For the third time in three days the Námestie Slobody (Freedom Square) in central Bratislava became a venue of a major protest gathering.

On Sunday, September 22, tens of thousands of people from all around Slovakia gathered there for the National March for Life, organised mainly by the Roman Catholic Church."Man has not given life to himself; it was given to him," said Bratislava Archbishop Stanislav Zvolenský, speaking to the crowd before the march.

The pro-life march participants came out to protest the abortion laws currently valid in Slovakia. It is now legal to abort until the 12th week of pregnancy. The protesters argue that the law discriminates against unborn children.

"We want freedom for unborn children to be able to be born and live free human lives," said Marek Michalčík, one of the organisers, as quoted by the Sme daily.

After the initial speeches, the crowd moved towards Hodžovo Square and Štefánikova Street, past the Main Station back to the Námestie Slobody square. 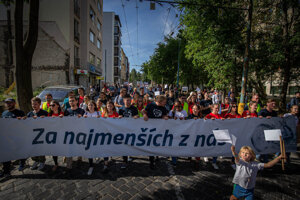 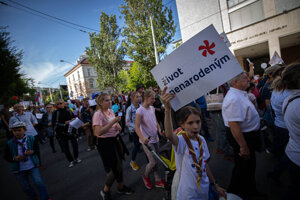 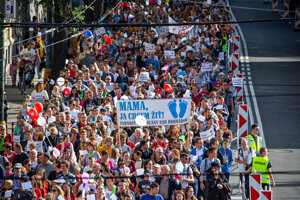 This was the third national pro-life march; the first was held in 2013 in Košice and the second in 2015 in Bratislava. The marches are co-organised by the Conference of Bishops of Slovakia (KBS) in cooperation with the non-governmental organisation Kanet, and heavily promoted in churches around the country. Attendance was massive by Slovak standards: about 80,000 attended in 2013 and 2015, as estimated by the organisers. This time around, estimates say some 50,000 people marched in Bratislava.

The march was accompanied by a two-day programme, which on Sunday also featured a holy mass held in the Incheba Expo Arena in Bratislava.

Demands of the march

The march organisers state their aim is the "societal and legislative protection of the life of every human from conception until natural death".