What the president said about the anniversary of the Velvet Revolution

Someone attempted to shake the foundations and we are still able to argue about ornaments. Read the whole speech of President Zuzana Čaputová. 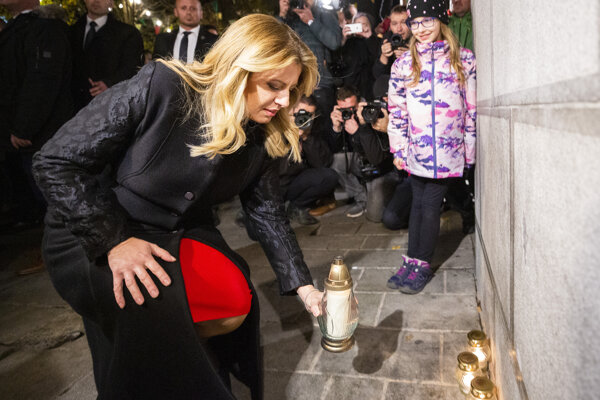 It is a great honour for me to be able to speak to the audience that has gathered in the Slovak National Theatre tonight.

I can see the faces of people whom I remember from 30 years ago, when I, as a student, followed the events of November 1989. I remember you from your public speeches, I saw you on pictures from those frosty days. I am pleased that I can say November was the merit of the personalities gathered here tonight.

Yes, the fall of the regime introduced by a Communist coup and that only remained in power thanks to the tanks that arrived in August 1968 is also thanks to you. And even though the regime made a tragicomic impression at the end of its days, we should never forget the fact that it took the lives of more than 5,000 people in Czechoslovakia.

Until November 17, 1989, its final moment, the totalitarian regime imprisoned its critics and used force to suppress any kind of resistance.

I am glad I have the opportunity to thank all of you who took this risk and contributed to the fall of totalitarianism. In Bratislava and Prague, in Slovakia and Czechia, in civic and in Catholic dissent, in the streets of our towns. Ladies and gentlemen, you have my deep respect.

I would like to start off my contemplation of what the past thirty years have brought us with a small historical comparison. To compare what the 1989 Czechoslovak Republic experienced in its 30 years and what was our experience. The first republic experienced the great economic crisis, the rise of Adolf Hitler, Munich, the protectorate and the wartime Slovak Republic, World War II and the end February 1948 [Communist coup]. Compared to that, our thirty post-November years have undoubtedly been a much better period.

The shared state of Czechs and Slovaks divided peacefully, the Slovak Republic became a full-fledged member of the United Nations, the Council of Europe, the European Union and NATO. We belong to the Schengen space and thanks to the euro, we are integrated within the union deeper than our neighbours. Slovakia has never before belonged among a community of countries with such exceptional democratic and civilisational values like now. Without November 1989, it would not have been possible.

Thanks to the events of November 1989, a fundamental change occurred in the relationship between the state and its citizens. Since February 1948, the citizens had no state, but it was the state that took its citizens property, enclosing them behind barbed wire. After November 1989 this relationship attained a new form. As the Constitution of the Slovak Republic says, "the power of the state comes from its citizens, who exercise it through their elected representatives or directly".

The principle that the state is here for us and not that we are here for the state returned to Slovakia 30 years ago. Its application in practice is admittedly far from perfect, but nobody can say with all seriousness that significant positive changes did not happen 30 years ago.

Despite that, articles appeared before the November anniversary with their authors asking why our celebrations might not be as joyful as they should be and where mistakes might have been made. In my opinion, a significant part of Slovak society is frustrated mainly for one reason. The constitutional guarantee that says "people are free and equal in their dignity and in their rights" remains on paper rather than reality. We do not lack freedoms, but what we are not getting as much as we need is equality in dignity and rights.

Although as citizens we are equal, the basic experience of too large a number of people is that their dignity and their rights are not fully respected.

People who live on a subsistence level and who experience a hard-to-cope situation with every unexpected cost know this. Small farmers who could not enforce their rights against the machinery of big land owners aided by the state office know it. All those who demanded their rights as guaranteed by law, but learned that court rulings can sometimes be bought, know it. People who are different and belong to marginalised groups know it very well. All these mentioned and many others are waiting for what we as a society are obliged to do: help them attain the respect of their dignity and their rights.

I must also mention one problem of the present day - the polarisation of society. Not just the fall of totalitarianism, but other big societal changes have only been achieved when we as a nation, as a society and as a state, pursued the aim together. Today we see polarisation not only along the coalition-opposition line. We also perceive it, unfortunately, in people from the same world of values.

We are facing a crisis of trust, we are witnessing big failures in the justice system, information about the links between business and politics, the oligarchisation of society. Metaphorically speaking, someone had attempted to shake the foundations and we are still able to argue about ornaments. People are tired of conflicts and those who provoke them have no good intentions concerning Slovakia, they only follow their own interests. It is the duty of every person active in the public space - politicians, media, judges, prosecutors - to strive for professionalism and adherence to strong standards of professional ethics. Because any kind of freedom that we have gained after November 1989 must be strongly compensated with responsibility.

Ladies and gentlemen, those who expected the changes in 1989 to offer new possibilities lived to see it happen. Those who expected that it would automatically mean a development for the better, must necessarily be disappointed. Democracy is an opportunity, not a guarantee of success. It is up to us to make use of this opportunity thirty years later. Democracy needs our attention, memory, engagement, and ability to cooperate. To be worthy of the legacy of November, not just an autumn memorial ceremony.

I would like to ask all of you: let's accept and carry this responsibility further. Let's complete the transformation process, and build a country together that will be a dignified place for life. To be able to make a biblical statement at the 40th anniversary of November: we have fought a good fight, we have finished our course, we have not lost the faith.

Thank you for your attention.

President Zuzana Čaputová delivered this speech at the gala evening marking the 30th anniversary of the Velvet Revolution, at the Slovak National Theatre in Bratislava, on November 16.