Booked out of the Foreigners’ Police online system? It's not an error

Trying to book an appointment online in Trnava and Dunajská Streda is a waste of time. 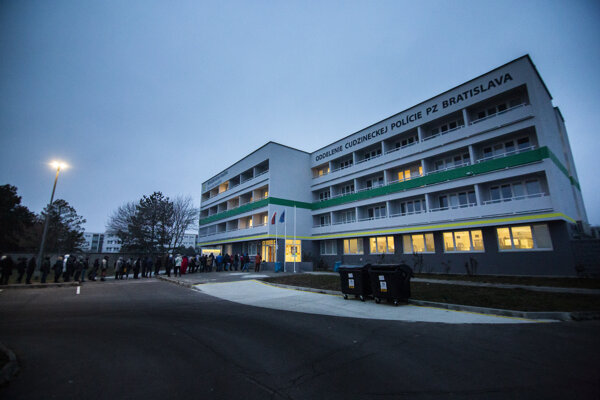 The much-awaited online booking system for appointments at the immigration offices has provided for a more satisfactory experience for many clients.

The notorious long queues in front of the Foreign Police, now the official name of the office that for a long time has been the target of jokes by expats due to its official name as the Office for Border and Alien Police, have not disappeared completely. That is also because some expats living in Slovakia did not know the appointment could be arranged online.

Those who did try the online booking system were mostly positively suprised, The Slovak Spectator found when speaking to them. Yet some complications occurred recently, after the booking system underwent changes on November 15 and migrated to the server where all other systems working within the police operate. Now, the system allows appointments to be made only in the two weeks that follow – and that could cause problems. The police say they are aware.

How the booking system works

Milan Kurota is the CEO of the SlovakiaInvest group, working with foreign clients and dealing with Slovakia's authorities on their behalf. He explained that clients first need to fill in the whole application form, which takes up to half an hour. Only after that does the system give the client a calendar for the next two weeks, but does not show which slots are free. In Kurota’s experience, by clicking through the days one usually finds that they are almost all full.

“Bad luck. You have just wasted half an hour,” he told The Slovak Spectator.

The filled-out form cannot be saved and submitted later. One can only try again later that day or on another day.

“There is no other option than to spend half an hour again and then see,” Kurota noted.

Magdalena Adrover Gayá, a Spaniard living in Bratislava, recently had an experience with the new booking system and she does not consider it very user-friendly. She also mentions the fact that a person making an appointment should fill all the information in the form before even knowing if there are times available.

“After that, you don't see a calendar with the availability, but instead you have to select a day. If it does not have available slots you have to try another day and so on,” she told The Slovak Spectator.

In the end, she managed to book online, but she had to try many times until she could get in. She was lucky to find a free date after two days of trying.

“I decided that I was going to try to see if at midnight if they opened a new day and that worked,” she shares a little trick that could help. "Right away, after getting my appointment, I tried to get one for a friend that was having troubles and it was all full again,” she said. That was about 30 minutes after midnight when all the dates were booked out.

Bratislava is not the worst