The Danube was still an unrestrained river and the horse-drawn railway was a novelty. 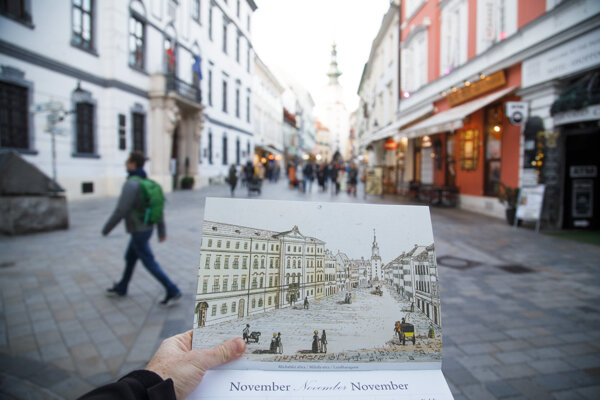 In 1833 during a fire caused by lightning, a baroque helmet roof fell from the tower of St Martin’s Dome. It was temporarily replaced by a shallow pyramidal roof. The new roof, again with a replica of St Stephen’s crown on its top, was built after 10 years. We only know what the dome looked like with the temporary roof and the new one thanks to historical graphics.

One of the authors who depicted Pressburg, today’s Bratislava, was the Austrian engineer architect, draftsman and graphic artist working in Vienna, Johann Vinzenz Reim. From 1834 to 1853 he created a set of 550 graphics with many views of various places in the Habsburg monarchy. 25 depict Pressburg.

The most valuable thing about them is that they show the former appearance of the city.

“We cannot find out what the city looked like at that time in any other way,” Patricia Ballx, curator of the old drawing and graphics collection of the Bratislava City Gallery (GMB), told The Slovak Spectator. 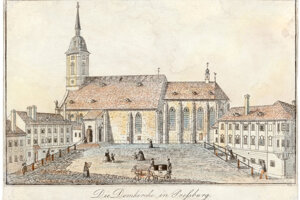 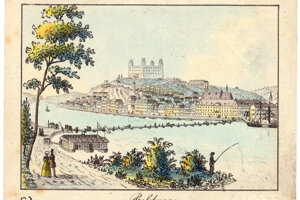 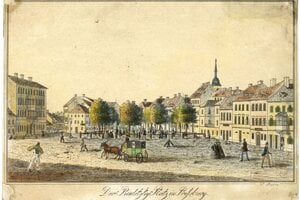 It is also interesting to see the city’s views and buildings he captured in his graphics.

“He chose buildings and places that were in motion at that time: the main squares, excursion resorts such as Ferdinand’s Bath at Železná Studienka and Aukafé, and the railroad,” said Ballx. 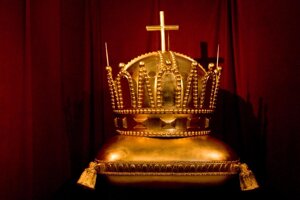 GMB has about 30 of Reim’s graphics in its collections, not only of Pressburg but also other cities. Nine of them are smaller, so-called preparatory graphics, others larger graphics with number and label.

“Although these are printed reproductions, some of which we have in two variants, each of them is hand-coloured, making a unique original of each one,” said Ballx.

The gallery obtained the first Reim graphics in 1959 when it received them from the Bratislava City Museum. It acquired others in 1964 and 1981. Still, three or four prints are missing to have the entire Pressburg set of 25 images.

“Today they are quite rare,” said Ballx, adding that sometimes they are offered at auctions or in antique shops, and even though they are rather small, their prices are high. “I haven’t seen them selling under €1,000.

If any of the missing Reim graphics missing in its Pressburg collection are offered for sale, it will certainly be interested.