Check out the most important business events of the year. 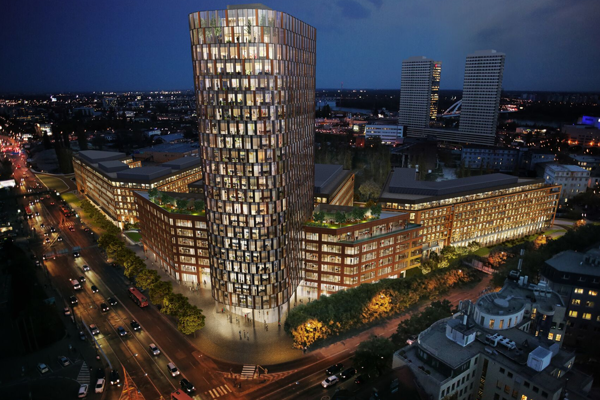 Žilina-based carmaker Kia Motors Slovakia kicked off the production of its newest model, the third generation of the Kia ProCeed.

MiddleCap Real Estate Ltd. sold New Stein, an office building on the former Stein brewery premises in Bratislava, to Prvý Realitný Fond managed by IAD Investments. Although they did not reveal the price, the companies claimed that it was one of the largest real estate transactions in Slovakia for 2018.

The Saudi-Arabian company Sisban started building a brand new logistics park near the village of Chocholná-Velčice (Trenčín Region). Sihoť Park will spread over 160,000 square metres, while investments are projected at €50 million.

More than 1 million vehicles rolled off the carmakers’ production lines in Slovakia in 2018. Volkswagen Slovakia, Kia Motors Slovakia, Groupe PSA Slovakia, and Jaguar Land Rover produced more than 1,080,000 vehicles, which is the highest figure in the history of Slovakia.

Economic freedom in Slovakia worsened slightly. It ranked 65th of 180 countries surveyed in the Index of Economic Freedom (IEF), published by The Heritage Foundation. Slovakia scored 65 points, which is 0.3 points less than the year before.

The U.S. Steel Košice steelworks announced the intention to build a new line for the production of non-grained oriented electrical steel, investing $130 million. Its production capacity is expected to be roughly 100,000 tonnes a year.

The British retail chain Tesco sold its department store in Kamenné Námestie square in the centre of Bratislava to the Mirage Shopping Center company of Žilina-based businessman George Trabelssie. The sum of the transaction has not been disclosed.

Slovakia has lost the whole decade to improving the quality of its business environment. Although there has been no rapid decrease, the country did not report any significant rise either. In the Superindex ranking for 2018, published by the Business Alliance of Slovakia, it scored 80.9 points, down by one position to 36th place compared with 2017.

Nové Zámky-based Novofruct SK announced a plan to produce baby food with a special Halal certification for Muslim consumers. All production should be exported to European and Arab markets.

Slovak startup Cviker from Poprad (Prešov Region) signed a prestigious agreement worth $60,000 with JBG Smith, the real estate company focused on the Washington metropolitan area. It will enable it to redraw the new quarter in Washington, D.C., where Amazon is to move its headquarters.

The Slovak financial group Proxenta joined forces with Confitería Caibarién to establish the first Cuban-Slovak joint venture. They will focus on the production of sweets.

Slovak technology company GA Drilling signed a deal on financing worth €4.2 million with the investment firm Lead Ventures. The latter invested in the former with the funds of the MOL group and Hungarian Eximbanka bank.

The cabinet approved a proposal to provide the Tachyum company with repayable financial aid of €15 million to develop a new processor.

The Bratislava-based carmaker Volkswagen Slovakia produced its one-millionth Touareg. The record-breaking vehicle was produced for a Polish customer.

The intention of the Swiss company Mubea Automotive Slovakia to establish a new manufacturing hall in Kežmarok (Prešov Region) was certified by the government as an important investment. The company plans to produce car components and set up an engineering centre, investing €51 million in total.

Slovak companies are the least disciplined firms in Europe when it comes to paying their invoices on time, the European Payment Practices study conducted by the EOS KSI company in 2018 suggested. The data indicated that up to 27 percent of payments by Slovak firms came either late or not at all.

The German company BHS-Sonthofen announced its intention to build a new manufacturing plant in the Záturecká industrial park in Haniska, near Prešov. It is expected to invest €10 million and employ 100 people.

AeroMobil announced an investment from the Israeli investment company Focus Capital Group and Chinese investment group Weilong Enterprise, with its headquarters in Shanghai. It should help the company complete the certification process and then kick off the sale of its 4.0 version of the flying car.

Gestamp, a multinational company specialising in design, development and the manufacturing of highly engineered metal components for the automotive industry, opened its new plant in Nitra. An investment worth nearly €130 million will create almost 200 jobs. The Slovak government supported it with a €9 million stimulus.

The government greenlighted an action plan to transform the Upper Nitra region after mining in the area ceases. It counts on pouring about €3 billion into the region within about 200 investment projects.

A new kind of blue cheese will be produced by the dairy factory Tami in Kežmarok (Prešov Region), with the company investing €15 million.

U.S. Steel Košice announced a plan to reduce the number of employees working at the plant and its subsidiaries by 2,500 before the end of 2021.

The Slovak company InoBat signed a contract with the American company Wildcat Discovery Technologies (WDT) concerning cooperation on the development and production of batteries for e-cars. A new plant should emerge in Slovakia in the second quarter of 2020, with an investment reaching €100 million. The project was joined by the Matador Group.

The Slovak arm of the German system service provider Mühlbauer obtained a building permit for the third construction phase of its factory in Nitra, adding a new building that should be completed by December 2020. The investment, whose amount has not been specified, will bring 200 new jobs.

Roechling Automotive, a German components supplier for the automotive industry, opened a new plant in Kočovce (Trenčín Region), with the ambition of employing 240 people. The construction of the new hall cost €12 million, while investment in technologies has consumed an additional €10 million.

The Slovak branch of the Hungarian OTP bank was put on sale. There are reportedly three bidders interested in purchasing the bank: ČSOB bank, Tatra Banka and the Penta investment group.

Austrian company Miba announced an investment of €10 million, to expand its capacities in Vráble (Nitra Region). The investment will create 80 new jobs.

The Panattoni Europe industrial developer has launched the construction of a new eight-hectare industrial park near Košice airport, with a price tag of €30 million.

The Duslo Šaľa chemical company stopped all investments into its development due to high electricity prices and increasing labour costs caused by governmental measures.

Altogether 43 Slovak companies appeared in the recent Coface CEE Top 500 list, up by two compared with 2017. On the other hand, there was only one Slovak firm in the top 10. The Bratislava-based Volkswagen Slovakia, however, fell from the 5th to 7th position.

The Centre of Development of Innovations, scheduled to open by the end of the year in Lučenec (Banská Bystrica Region), will among other things develop a new type of battery for cargo transport. The government will support the centre’s construction with a subsidy of €140,000.

British carmaker Jaguar Land Rover (JLR) introduced a new version of its iconic Defender, which will be exclusively manufactured in Nitra.

The Brose Prievidza company kicked off the construction of its third manufacturing hall, where around 400 people will find a job once it is completed. It will cost €50 million.

The oldest shopping mall in Bratislava, Polus City Center, will be renamed Vivo! once its reconstruction is completed. The Immofinanz company from Austria invested €25 million into the facelift.

Economy Minister Peter Žiga introduced an action plan comprised of 42 measures to support the business sector and the Slovak industry. He did so shortly after PM Peter Pellegrini met with the representatives of employers, who had criticised the high work surcharges and fast-growing minimum wage joint for all sectors, promising to draft measures to help businesses in times of slower economic growth.

There were 151 robots per 10,000 employees in Slovakia in 2018, according to the latest World Robotics report published by the International Federation of Robotics. This is nearly twice as much as the global average.

The government approved the increase in the minimum wage. It will rise from the current €520 to €580 as of January 2020.

Slovakia ranked 42nd of 141 countries surveyed in the 2019 Global Competitiveness Report, published by the World Economic Forum. With a score of 66.8 points out of 100, it worsened its position by one spot compared to last year.

The government approved an incentive of €2 million for German carmaker Porsche to build a new technology centre, focusing on the automatisation and robotisation of car production, in Horná Streda (Trenčín Region).

The Czech PPF group, owned by Petr Kellner, signed an agreement to acquire the current owner of private broadcaster TV Markíza, CME, which operates TV stations in several countries. The transaction is estimated at USD2.1 billion.