Officers mention a fine of €10 million in the letter. 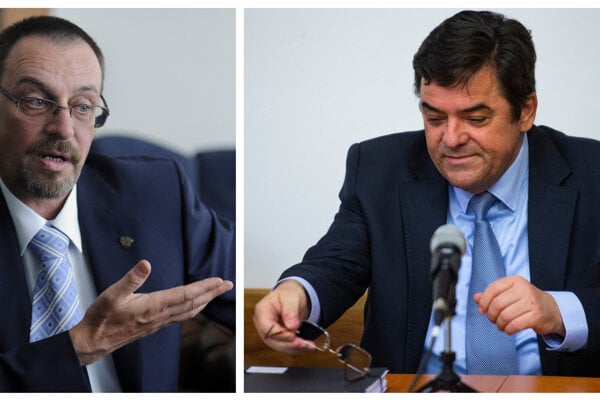 A short video published by a Czech investigation team of journalists reveals how former General Prosecutor Dobroslav Trnka (left) and accused businessman Marian Kočner (right) planned to blackmail some of the guests to Trnka's office by making secret recordings of them (Source: TASR/TSS)
Font size:A-|A+10

Slovakia’s Office for Personal Data Protection (UOOU) has called on the Czech investigative journalism website, Investigace.cz, to reveal who sent them a video, which had been recorded in the office of Slovakia’s former general prosecutor Dobroslav Trnka.

The video depicts Marian Kočner as he installs a camera in Trnka’s office. Trnka is also featured in the video.

“As a matter of principle, we protect our sources just like other good journalists do,” the website said in reaction to the letter. “Besides, we not only have the right but also the duty to protect them under European legislation.”

The UOOU mentioned the journalists might be asked to pay a fine of €10 million. At the same time, the office asks journalists in a letter if they possess other related video footage and information.

UOOU: It is not a threat

After the website published the letter they had received, the UOOU said the investigative journalists did not get the request right.

“We want to find out if we can act in this case or not, that is to say if the video falls within our competences,” the UOOU spokesperson Tamara Valková said, as quoted by the Sme daily.

She added a similar letter was sent to the General Prosecutor’s Office , the police, and the Interior Ministry. The letter, moreover, does not force the journalists to reveal their sources and there is no threat of a fine if they decline to cooperate, Valková added.

The ministry published instructions for Covid home treatment after one year

There is one more website to find information, but only in Slovak.