Europe needs to adapt and act swiftly and firmly

The legacy of 1989 is freedom, unity, and sovereignty. 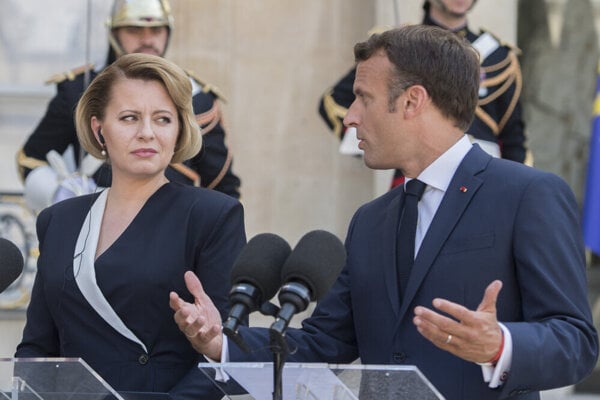 Christophe Léonzi is the French Ambassador to Slovakia

It is encouraging to see the vibrant commemorations celebrating the 30th anniversary of the Velvet Revolution in Bratislava, for which civil society, citizen movements and Slovak authorities joined forces.

The engagement of Slovaks in the Velvet Revolution was fundamental to this historic moment, the living memory of which should be passed on to future generations. Young Slovak citizens should proudly embrace everything that our united Europe owes the citizens of Central Europe who waged the revolution.

At a time when dark forces are looming once more, Europe needs to rekindle the spirit of 1989, one of enlightenment, and take inspiration from this revolution in furthering European integration.

1989 restored freedom, sovereignty and unity to Europe. We need to ensure that the European Union is reformed and strengthened in order to preserve these precious achievements in the face of new challenges.

Freedom, which was totally regained by the “powerless” from the totalitarian Soviet system. 1989 showed the extent to which Europe aspired to democracy, individual freedoms and fundamental rights, which make up our common heritage. These principles, these values, achieved at such a high price, are the ones that are now cemented in the foundation of our European Union, a legal construction, and that it has a duty to defend in the world.

Unity, by tearing down the Iron Curtain and regaining the deep community shared by Europeans through the centuries. “Eastern” Europe, artificially created by the Cold War, never existed. Our European unity was built first and foremost by recognition of the diverse memories of the European peoples, but also by the full recognition of the cultural and political contribution of the peoples of Central Europe to the history of our continent, especially through the long and painful efforts of nationalities against the Empires and the combat against Nazi, then Soviet totalitarianism.

Our European Union is a “historical product” of this long journey: it should be defended against any attempts by external powers to divide, weaken or influence it.

Europe will not be unified unless there is full accession of all the Western Balkan countries. France wants to facilitate their future effective integration with a preparatory process that is demanding in terms of the fundamental values and the rule of law, but that is also inclusive and more generous, giving access to common policies starting in the pre-accession stage.

European unity is also built on upward social and economic convergence, an essential promise of the internal market and European integration, which is now in need of a considerable investment boost in the area of research, innovation and new digital technologies.

1989 also consolidated European security through an unprecedented strengthening of multilateral commitments and confidence-building measures, as demonstrated powerfully by the Charter of Paris of November 1990.

The world is currently experiencing an unprecedented crisis of our international system caused by completely new challenges and internal factors.

It is a crisis of our international political and economic system, which is based on the social and market economy, openness, free trade and post-World War II cooperation systems, which has lifted hundreds of millions out of poverty, and which has brought peace to so many regions in the world.

In recent years, however, this system has seen the re-emergence of new inequalities, societal divisions, doubts in Western democracies, which were the pillar of this system, and even brutal unilateralism at the very core of this international system. This internal crisis of the system has disrupted our societies and our economies.

New challenges have burst on to the scene: the offensive of authoritarian, totalitarian, terrorist or fanatical counter-models, which are dangerously seductive even at the very heart of our societies in crisis and among our youth; the challenge of unchecked population growth with growing major migration; and the digital technology challenge and everything it offers in terms of transformations of work but also our imaginations and balances in our societies. And the climate challenge, mainly the fight against the global warming that threatens our planet, and the fight for biodiversity.

Europe, which is at the heart of the multilateral system and at the centre of its balances, is fully affected by these challenges and must adapt and act swiftly and firmly.

First of all, because in the face of these challenges, Europe plays an essential part in the solution for one simple reason: our Europe is a laboratory for multilateralism. It is undoubtedly the most complex laboratory because it wore itself down for thousands of years in civil wars. It is the place in the world where we are most aware of the value of cooperation or rather the price of non-cooperation, and therefore the valuable ability to build balances and compromises, including when everything is being pushed towards difference. This sovereign and democratic Europe must play a full role and shoulder all of its responsibility in the construction of new multilateral balances, by rallying the willing powers around it.

This is wholly the case when it comes to the rule of law, the climate, migration and the economic, social and health sectors, where it is more active than any other international stakeholder in multilateral solutions, ensures conditionality of its assistance and embodies a model of tempered, democratic regulation, based on law and not force, and focused on the long term.

Moreover, Europe’s interest to act is also dictated by its security interests, which are very dependent on multilateral regulation that many forces today seek to weaken and even replace with unilateral procedures driven by brutal forces.

This ambition to build European collective security, which was so present in the early 1990s, with the Charter of Paris, has gradually faded away. We are witnessing an active deconstruction of multilateral commitments, treaties and confidence-building measures that guarantee security in Europe. Since the conflicts of the former Yugoslavia, war has once again returned to Europe, hitting Georgia, then Ukraine. Chemical weapons have been used on the soil of a major European city. Cyber-attacks have sought to sabotage and undermine our democracies.

The time when Europe could entirely entrust others with its security and depend exclusively on them has passed. European nations, intrinsically committed to multilateralism, must actively address their security interests and shoulder all of their defence responsibilities.

In the spirit of the Atlantic Alliance, deterrence and dialogue, we must first and foremost actively preserve and strengthen the fabric of multilateral security commitments, which are of concern to our continent, which is strongly affected. This justifies efforts for dialogue, without leniency, with regard to Russia.

We obviously need NATO to remain what it, at last, could be for every one of us after 1989: a stabilising force. In this regard, France is very committed to Article 5 and the irreplaceable role of the Alliance in the collective defence of Europe. The absolute condition for a strong Atlantic Alliance is now that Europeans act more proactively and take on more responsibilities, within an overhauled and rebalanced alliance. That is what our American partners expect of us.

European countries should also accelerate the construction of a European defence, a solid pillar of the Alliance, with a common strategic culture, advanced industry, as well as capacities and means to intervene effectively and autonomously when their own interests are at stake. Europeans must define and defend in particular their specific security interests and needs.

Central Europe can count on France

The fight against Islamic terrorism and Daesh is one of these absolute priorities. Our partners cannot ignore or undermine these strategic European interests. Strengthened European defence in its different dimensions should enable Europeans to acquire genuine strategic autonomy.

Europe should also strengthen cybersecurity, win the innovation battle including by developing European champions, consolidate our role as a normative power in this area and protect the common goods that are shared and open digital infrastructures.

With the United Kingdom and Germany, France is the European partner that cooperates the most actively, not only on paper, but in the field, with the United States, and the most engaged within NATO and in European defence. France contributes to the enhanced Forward Presence in Baltic countries, to the NATO Response Force, and to many European and United Nations operations in Africa and the Levant. Fighting for the security of our continent, the French armed forces have sacrificed lives.

France will be uncompromising if its sovereignty or that of its partners and allies is at stake. France respects the security interests of all our European partners, which it has made entirely its own. It will always defend them as an inviolable priority. Our allies, especially in Central Europe, can also count on France and on its commitment to defend their security. We also count on them to support our efforts to help ensure European security in the Sahel region and in the Levant.

European countries must make these crucial efforts to raise awareness and take the lead themselves in order to preserve and fortify the precious achievements of 1989: freedom, sovereignty and the unity of Europe.