The former journalist-turned-spy Peter Tóth, who surveilled journalists for Kočner, testified on the third day.

Consistent, thorough, calm. All of that could be said about Peter Tóth and his testimony at the court in Pezinok on the third day of the closely-observed Kuciak murder trial.

Alongside Zoltán Andruskó, who was directly involved in the murder and will serve 15 years in prison, Tóth is a key witness of the prosecution. A onetime friend of Marian Kočner, Tóth came forward as a witness in the case on October 5, 2018, two days after Alena Zsuzsová was detained and charged with ordering the murder of Ján Kuciak, during which his fiancée Martina Kušnírová was also killed. 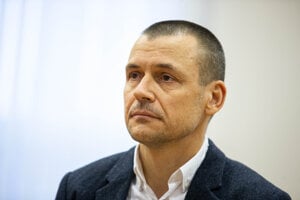 "I haven't got the slightest doubt that these two people plotted and prepared the murder of Ján Kuciak," Peter Tóth told the court about Kočner and Zsuzsová.

Tóth was the one who gave the police Kočner's phones and documents, and testified about his plans and connections with Zsuzsova. In court, Tóth continued to spill the beans. He told the court about the surveillance of journalists he conducted for Kočner and named many names, including businessman Norbert Bödör, but also judges and politicians whom he said were part of Kočner's contacts.