Effects of global changes will depend on the policies Slovakia implements

The speed of transformation requires us to plan ahead and be prepared. 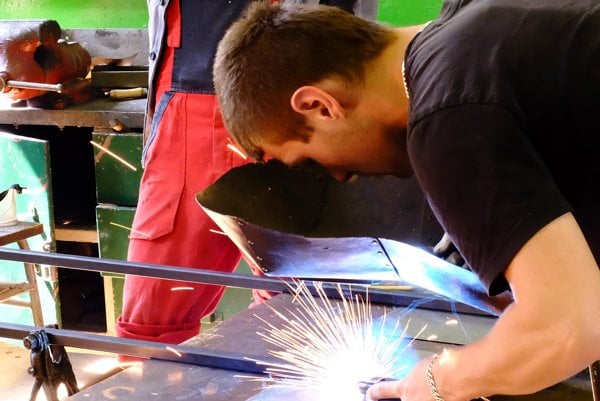 It is extremely difficult to predict which jobs will exist in future. (Source: TASR)
Font size:A-|A+0

Vladimír Šucha is an education, research and innovation expert of the Progressive Slovakia – SPOLU coalition.

Predicting the future is a highly uncertain exercise – and possibly even more so at this moment. We may be at the brink of pivotal revolutions in terms of technological developments, climate change, societal transitions, and geopolitical balance.

As an example of the pace of change, it took only seven years for one quarter of the US population to gain access to the internet, compared to 16 years for personal computers, and 35 for telephones.

Between the dawn of civilisation and 2003, we only created five exabytes of data; now we are creating that amount every two days. By 2020, that figure is predicted to sit at 53 zettabytes (53 trillion gigabytes) – an increase of 50 times.

So, while predicting the future may be difficult, the speed of the changes ahead call us to reinforce our preparedness, based on a strategic analysis of what we know. How does Slovakia perform in the European and global context?

The debate is still open on the actual impact of automation and artificial intelligence on jobs. Estimates of the share of jobs that could be automated in the future vary widely. The types of jobs most exposed to automation are ones that require relatively low levels of formal education, involve routine tasks and do not involve relatively complex social interaction.

Of course, it is extremely difficult to predict which jobs will exist in future; about 30 percent of new jobs created in the United States over the past 25 years did not exist, or had just started to emerge at the beginning of that period.

Yet, even if we cannot yet name the jobs that will appear in the future, we may be in a better position to describe what workers will be doing at these jobs. For instance, some of the AI-related profiles sought after by employers may concern workers who manage data and design algorithms, or are able to interpret and organize AI systems.

We do not know exactly what skills will be needed but we know for sure that problem solving, team work, advanced literacy, communication will definitely be valued highly.

Slovakia is a special case

The extent to which jobs will be automated greatly depends on the specific context. Many factors beyond technology are at play, varying between EU member states and regions. The prevalence of jobs at risk of automation is much higher than the average for example in eastern Europe (Slovakia, Slovenia, Poland) and southern Europe (Greece, Spain), while Nordic countries and the UK seem to face a lower risk.

Slovakia is a special case. The OECD predicts that more than 60 percent of jobs will be either replaced or significantly altered by automation. The country is the most vulnerable among all EU Member States.

But we must not fall prey to fatalism. The global transformations currently underway are not inherently good or bad. Their effects will depend, largely, on the policies we implement. For too long, perhaps, Slovakia has not been smart enough. It invested neither in education nor in innovation, two fundamentally important areas to prepare for change.

Education not just in schools

Digital skills but also what we call “non-cognitive” – or social and emotional - skills will be crucial to future industries. While a small number of individual schools may be developing these skills in their pupils, an overall strategic approach is missing. We need a deep reflection of how our education and training systems are delivering these skills, and how they may better deliver them in the future. This involves a shift from the mere transmission of knowledge towards equipping people with the ability to anticipate changes and be more flexible, creative and resilient at work.

Also, the acquisition of knowledge only through initial education will not be enough to thrive in the constantly changing world. This calls for the true implementation of a lifelong learning approach and adult professional education.

A third dimension that needs to be reformed and strengthened in the Slovak education system is vocational education training (VET). There is very little cooperation with the industry and the overall structure is outdated.

Boosting innovation is the second most important factor in increasing the resilience of the Slovak economy and its social system. Innovation is producing new jobs that may replace those eliminated by the automation.

The technology transfer between academia and business is very poor and needs to be significantly reinforced. Public-private partnerships and true implementation of the Smart Specialisation Strategy with genuine entrepreneurial discovery process are key factors in boosting innovation in the country.

Regional disparities in the country are significant. For instance, 52 percent of research funds go to the region of the capital, Bratislava. This is largely unsustainable. Recent developments in both Europe and the United States have shown that “leaving regions behind” involves huge political risks. It is thus essential to carry out an extensive analysis of the risks and opportunities for all Slovak regions to make the best of the identified opportunities.

There is a need to create regional and local innovation hubs by linking public administrations, local enterprises, educational and training establishments, as well as civil society.

Each region has its own specific mixture of priorities in relation to its environment, economy, demography, health, and so on. This approach could thus provide an excellent opportunity to harness local creativity, culture, and knowledge of the territory to create relevant and competitive innovative products.

The local and regional hubs, however, need to be connected within one national structure. We therefore believe that the creation of the Slovak Institute of Technology and Innovation as an umbrella organisation would be an important step. It would keep the local specificity and ecosystems blooming and, at the same time, it would ensure the coordination, focus and exchange of good practice.