The far-right ĽSNS in the game to win 2020 elections

The party is on the rise, achieving its best result in the Focus polls. 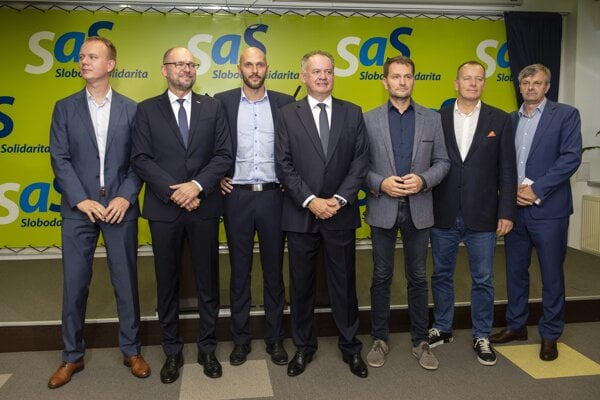 The January 2020 Focus poll implies democratic opposition leaders would need Sme Rodina, chaired by Boris Kollár (second from right), to join their coalition if they were to establish the next government. (Source: TASR)
Font size:A-|A+  Comments disabled

Less than two months before the 2020 general election, the far-right Kotlebovci – People’s Party Our Slovakia (ĽSNS) has recorded the highest support of all Focus polls published to date.

There is even a chance that under certain circumstances, it could win the vote.

The party won 13.6 percent of the vote in the poll carried out in early January, up by 1.8 percent compared with the previous month.

“He makes his messages easily understandable,” said Martin Slosiarik, head of the Focus pollster, as quoted by the Sme daily.

ĽSNS chair Marian Kotleba says he wants to fix the problems in society by applying the same rules to everyone, which appeals to many voters, he added.

The only party to surpass the ĽSNS in the poll was Smer with 18.7 percent.

Slosiarik thinks the far-right party is growing in popularity because Smer voters and voters for the Slovak National Party (SNS) feel disappointed due to several scandals which came to light after the murder of journalist Ján Kuciak and his fiancée Martina Kušnírová in February 2018. However, people who did not cast their vote back in 2016 are behind the ĽSNS’ growth in the first place.