A Trnava protest against extremism resulted in several incidents. 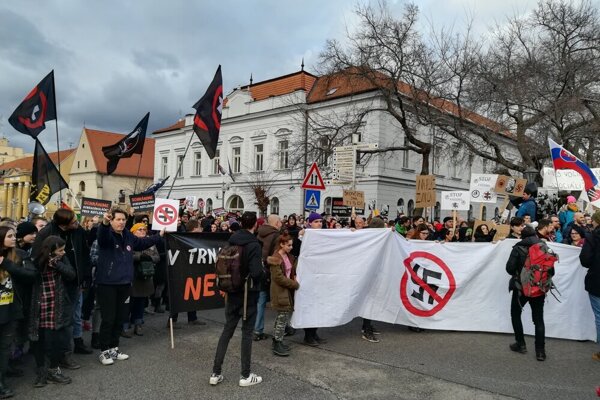 Trnava locals walk out to the streets in response to a gathering held by the far-right ĽSNS party on January 31, 2020, in Trnava. (Source: Martina Radošovská)
Font size:A-|A+14

The atmosphere at two public gatherings in Trnava, in which two different groups stood against each other at the same time, was intense, leading to several incidents.

The far-right People's Party Our Slovakia (ĽSNS) held its pre-election event in the city while the Trnava Does Not Discuss with Fascists initiative organised its own anti-extremism event on January 31. More than a thousand people took part in both events, of which anti-extremism protesters dominated the Trnava streets, the Sme daily reported.

Despite police forces being present, one of the incidents involved an attack on members of the Progressive Slovakia/Spolu (PS/Spolu) coalition of parties, including candidate Pavel Sibyla. The incident happened after the protest as a group of politicians walked towards a car.