The airport first wanted to use the plan for training. 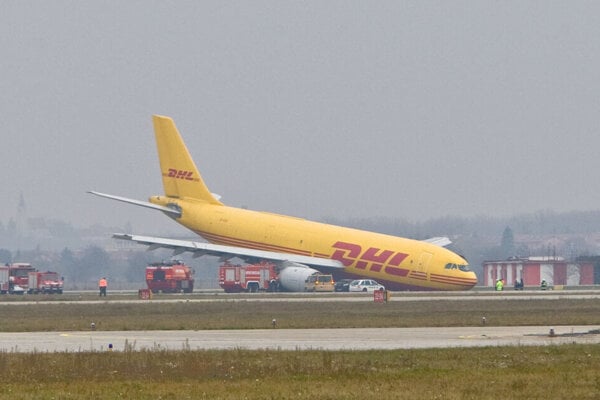 “A plane crashed in Bratislava” said the media headlines on November 16, 2012.

The accident occurred at the Bratislava airport in the early morning hours, when a cargo plane owned by courier and logistics operator DHL suffered a failure of its front landing gear. It subsequently turned off the runway and ended up on its nose.

Even though the plane was immobile after the crash, it was only moved from the runway, with the plan to continue using it later, the Index economic magazine reported.

The plane meanwhile changed owners, being transferred from DHL to Bratislava airport “for a symbolic one euro”, as the airport’s spokesperson Veronika Ševčíková told Index.

The airport originally wanted a non-functional plane to be used for training rescue units and cabin crews to be prepared for the extraordinary situations.

It has recently decided, however, that it does need the broken plane anymore.

“The plane will be dismantled and disposed of in the near future,” Ševčíková told Index.

The plane has never been used for training in crisis situations, she added.

“As the plane is broken, it would be necessary to ensure its safe anchoring, repairs and additional adjustment, long-term maintenance and necessary certification for such purposes, which would be expensive,” she continued.

The removal and subsequent disposal of the plane will be provided by an external supplier. It will cost €4,800 without VAT.

Read more articles by the topic
This article is also related to other trending topics:
Milan Rastislav Štefánik