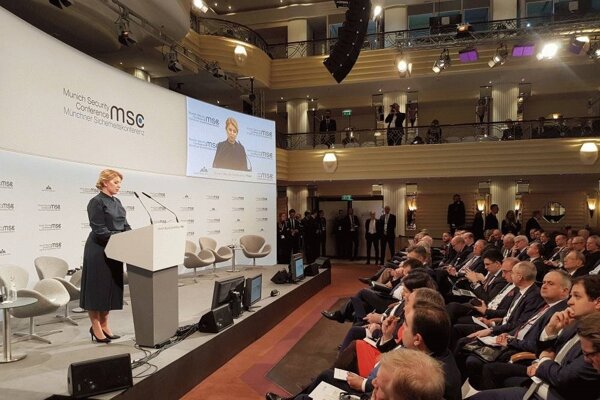 President Zuzana Čaputová addressed the Munich Security Conference on February 16, 2020. This is the full text of her speech.

The theme of today’s discussions is a Europe that protects. A Europe that protects our citizens, but also our values. I come from a region where – judged by numbers alone – we live better than we ever have. Central Europe’s economic output is growing and unemployment is down. This is the result of reforms we have carried out over the past 30 years.

Yet despite these economic successes, we are hearing questions about where Central Europe is headed. Does the region really contribute to European unity? Does it really help create a Europe that protects? Increasingly, I am asked why some countries in our region focus on improving standards of living – but somehow forget about the standards of democracy. Why can we protect our economies but lack the same determination to defend our values?

I have no clear answer. But it may have something to do with the fact that we grasped democracy, progress or reforms over the past thirty years in a rather technical way: Economic growth expressed in numbers, reforms translated into a number of new institutions, a set of criteria to be fulfilled.

It's as if we have forgotten that democracy – and may I say Europe and the West as such – are mainly about the spirit of freedom, justice, tolerance, and solidarity. These are bound together by the rule of law. Democracy is about everyday respect and observance of rules, not about bypassing them. Simply put, it is about responsibility.

To understand why there is so much talk about the crisis of the West and “westlessness”, we need to start with ourselves and answer these questions: who are we as Europe or the West? What unites us and what threatens us? For me, the answer is clear: we are a community of values whose strength stems from our ability to live by these values and to defend them.

Visegrad countries suffer from past deformations

At the first level comes the responsibility to set the rules. Political leaders should help create laws that guarantee freedom, security and stability. Central Europe is a good example: after our democratic revolutions thirty years ago, we invested a lot into building a proper justice system. Some of the components had to be built anew but that turned out to be a good thing. Because today they are contemporary, flexible, and relatively progressive.

Nonetheless, when it comes to the judiciary, the Visegrad Four share several challenges. These are all legacies of our communist past and could be labelled as “defensive formalism of post-communist justice”. Simply put: the combination of ignorance of the spirit of the law and the lack of courage. When it comes to the judiciary in Central Europe, our biggest challenge is reforming those who are still the preservers of past deformations.

That is why disciplinary justice – which should ensure professionalism and moral integrity of the judges – is on the agenda not just in Poland but elsewhere in the region. Each country has addressed the challenge differently, but we must all stick to one principle: the judiciary must always stand on two pillars - independence and personal accountability. One pillar must reinforce – and not endanger – the other.

The biggest challenge for the West

The second aspect of leaders’ responsibility is personal, or moral. Defending the rule of law means not just acting in line with the laws of the day. These can be changed through a simple majority. It implies a voluntary limitation of power, through separation and checks and balances. Power is expansive by default. It requires leaders who know that defending the rule of law and democracy also means self-restriction. And it also requires the ability of leaders to resist the temptations of power and to foster respect for the rules.

Finally, the third level of political leaders’ responsibility is societal. Today, concerns about the rule of law in Europe or the West in general go far beyond the question marks about the state of the judiciary in a particular region. We are all facing the rise of populism, extremism and irresponsible narratives that divide our societies and attack our rules and values.

This is the biggest challenge we face today as the West.

Political leaders have a responsibility to call out and reject all forms of extremism and radicalism. To protect minorities, to defend and express solidarity with those targeted by extremists and populists. To call out lies and manipulation wrapped in empty promises. They have a responsibility to unite, not to divide societies into “us” and “them”, “east” and “west”, “north” and “south”, “city” and “countryside”, or “elites” and the “people”.

Respect for the truth is the essence of the rule of law. We must protect societies from false statements if these violate our fundamental rights. Paradoxically, today the rule of law can be undone by false narratives about the rule of law. When someone promises to bring or restore order, let us also look into whether they want to deliver it through authoritarian means, and whether they don´t see democracy or pluralism as an obstacle to their goal.

This is the challenge to the rule of law in the West, not just the quality of our laws or the independence of the judiciary. Political leaders have a special responsibility to promote respect for rules, to resist populism and to avoid singling out someone just because it brings political scores. What we learned about our climate applies elsewhere too: short-term benefits can inflict irreparable damage on future generations. This is why we must promote and protect the key ingredients of a healthy democracy: independent media and civil society.

If we give up on this duty, there will be no West or Europe that protects. In our EU context, justice implies a balance between rights and obligations, benefits and commitments. Debates about a stronger link between our EU budget and the respect for shared values are therefore legitimate. The link must be appropriate and fair, and based on a clear set of criteria. But it should also be guided by empathy – not to relativise the challenge but to consider different historical, societal and legal starting points.

Let me conclude by saying one thing. Europe’s strength lies in our joint determination to protect freedom, democracy and mutual respect. In our commitment to personal and political integrity, and in our shared understanding that the rule of law and the spirit of law must remain untouchable. Only then can we have a Europe that fully protects.