The growth of Slovakia’s economy came as a positive surprise to analysts.

The gross domestic product at constant prices increased in the final quarter of 2019 by 2.1 percent year-on-year. After seasonal adjustment, GDP rose by 1.9 percent y-o-y and 0.6 percent compared to the previous quarter. 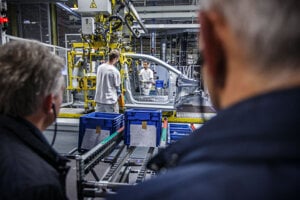 The volume of GDP at current prices in the fourth quarter of 2019 amounted to €24.2942 billion, up by 5.1 percent y-o-y, according to the flash estimate published by the Statistics Office on February 14.

“The growth was slightly higher than we expected,” Mária Valachyová, chief economist at Slovenská Sporiteľňa, wrote in a memo. Their expectation was 1.8 percent y-o-y.

She also considers the increase in the quarterly growth tempo a good signal, particularly after previous indicators showed a relatively weaker industrial performance.

Since the Statistics Office will publish updated results on March 6, 2020, it is not clear what helped the growth.