I tried to facilitate an escape from debtors' prison but I failed, says the former Greek finance minister. 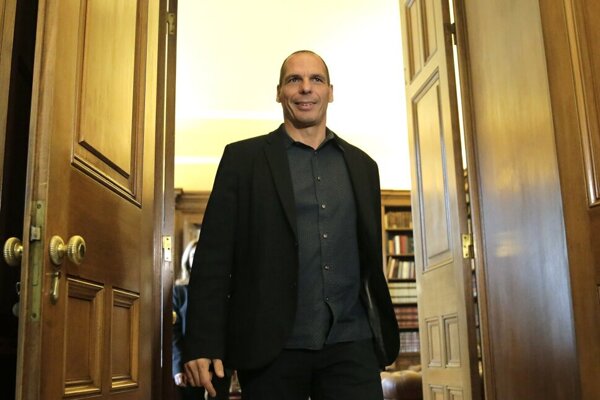 Read in this interview:
-What are Varoufakis' objections against Kažimír and why did he publish things people told him behind the closed doors?
-Who killed social democracy in Europe?
-Why does he say the EU is undemocratic and what’s his idea for saving it?

Yanis Varoufakis became the finance minister of Greece five years ago. He spent half a year trying to persuade creditors that his country was unable to pay off its giant debts. He rejected austerity, which in the end cost him his ministerial post. In this interview for the Sme daily he says, among other things, what he has in common with the Brexiters and why he believes the former Slovak finance minister was the worst in Europe.

Reporting on the recent first sale of Greece’s 15-year bonds since 2009, Bloomberg wrote it was a return to normality for the country. Is that true?

No. The word paradox is Greek and it’s not an accident. Greece is more bankrupt than ever and yet bonds are selling like hot cakes. 90 percent of the debt is not on the market, it is now with institutions. It’s been shifted from the markets onto the shoulders of taxpayers. Given that the ECB is whispering to traders that we’re behind this, of course they buy.

Is it worse than five years ago when you became finance minister?

Small shopkeepers and workers are worse off than five years ago. Oligarchs and those who are participating in the bond-buying, the 1 percent, are better off. Overall, the country is deeper in trouble than it was five years ago.

Has your stint as finance minister helped the country?

Leftist economist. His father fought in the Greek Civil War on the side of the Communists. Before entering politics, Varoufakis lectured at universities in Cambridge, Sydney, Athens, and in the US.

He became finance minister in January 2015, for the far left Syriza party. In July that year, Greek voters rejected further austerity measures but the government accepted them in the end and Varoufakis quit as minister.

He went on to found the DiEM25 movement, designing reforms for the EU. The movement ran in the latest election in eight countries, but did not win any seats.

Not at all. I failed. I tried to do the right thing, but I wasn’t allowed to by my own prime minister. What I tried to do is what we still need to do today – debt restructuring, so that the country can breathe again. If you’re pretending to be solvent, the only way to do it is getting more loans or extending previous loans. The only reason why the Troika (European Central Bank, International Monetary Fund and European Commission) are allowing you to do it is because they are imposing upon you further austerity, pushing incomes down for the majority, making the indebtedness worse.

It was a prison break, I tried to facilitate the escape from debtors’ prison. Of course I don’t regret doing it. But the prison break did not work because of our own prime minister.

The average pension in Greece after the cuts was around €800, while in Slovakia it is €400. Slovaks did not understand why they should be helping a richer country. How would you explain it to them?

As a minister of finance, I was very clear I wasn’t asking for help to maintain the pension.