A political revolution or the time of marketing and populism?

The foreign media respond to the election outcome. 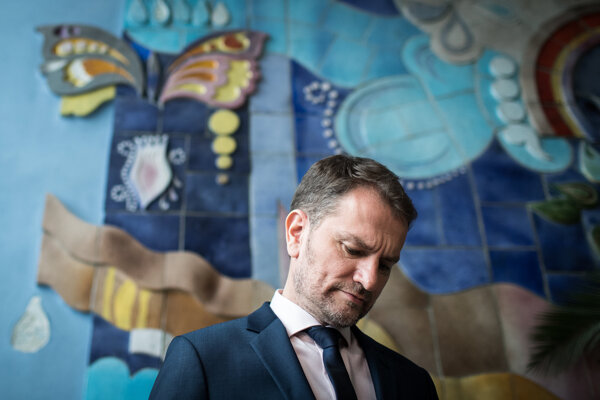 The outcome of the February 29, 2020 election caught the attention of several foreign media, which wrote about the victory of the Ordinary People and Independent Personalities (OĽaNO), the party that dethroned Smer after 14 years of leading the polls.

The long-time governing party in Slovakia suffered a sweeping defeat in national elections on Saturday, paving the way for a new government coalition that promised to fight corruption and promote the rule of law, The New York Times daily commented on the election outcome in Slovakia.

The election, as it put it, was the culmination of one of the most turbulent periods in Slovak politics, while the issues convulsing the small central European country are the same ones coursing through democracies across the former Soviet bloc.

“Populists hope to tap into public anger by appealing to an aggrieved sense of nationalism, often competing with progressives who cling to the flag of the European Union as a symbol of a future that brings the Continent’s nations closer, not further apart,” NY Times reported.

Igor Matovič, a millionaire anti-corruption campaigner with a populist touch, had pulled off a stunning victory, the British broadcaster BBC said. It reminded of the fact that OĽaNO will control over a third of parliamentary seats. Matovič is poised to become the prime minister and gain a constitutional majority.

“True to form, former prime minister Robert Fico arrived at his party’s election headquarters by the back door and left without speaking to reporters – and what was there to say?” the broadcaster reported. “His party suffered its worst result in a decade of its government; it’s never recovered from the murder of Ján Kuciak, which took place on its watch.”

Commenting on the performance of the far-right Kotlebovci – People’s Party Our Slovakia (ĽSNS), it noted the party's result was slightly worse than in 2016, but it still gained 17 seats due to the parliamentary agenda.

“Their rise appears to have mobilised liberal voters, but the continued presence of a virulently nationalist and xenophobic party will worry those who thought that at heart, Slovaks believe in liberal democracy,” BBC reported.

Slovak opposition, led by OĽaNO, won an emphatic victory in the country’s parliamentary election, as voters angry with graft routed the ruling centre-left Smer, which has dominated the political scene for over a decade, the Reuters newswire reported.

It describes the movement as a politically amorphous, pro-European Union and pro-NATO movement focused on fighting corruption.

“The political shift in the euro zone member state, which has avoided fights with Brussels unlike its central European Visegrad Group neighbours Hungary and Poland, started with the 2018 murder of journalist Jan Kuciak and his fiancée,” Reuters continued, mentioning the revelations during the investigation and the events that followed.

“The centre-right populist opposition claimed victory in the parliamentary election in Slovakia, ending the reign of the country’s long dominant but scandal-tainted leftist party that governed on an anti-immigration platform,” the AP newswire starts its report on the Slovak election outcome.

OĽaNO captured the victory in a move “that steered the country to the right and could make a local ally of France’s far-right National Rally party, led by Marine Le Pen, a part of the governing coalition”, it added.

The newswire also reminded of the fact that Smer has been in power for most of the past 14 years, and even won the last election after campaigning on an anti-migrant ticket.

“But the party was damaged by political turmoil following the 2018 slayings of an investigative journalist and his fiancée,” AP reported. “In what would be a further blow for Smer, its two current coalition partners, the ultra-nationalist Slovak National Party and a party of ethnic Hungarians looked like they wouldn’t win any seats.”

Commenting on the potential union of OĽaNO and We Are Family of Boris Kollár, an ally of Le Pen’s party in Slovakia, it said that it is hard to estimate whether their partnership can survive the whole four-year term.

Slovak voters handed a resounding victory to the centre-right, anti-graft OLaNO opposition party in Saturday’s general election, dominated by an angry backlash over the 2018 murder of a journalist probing corruption in the eurozone state, the AFP newswire reported.

It continued that OĽaNO leader Matovič galvanised voter outrage over the murder of Ján Kuciak and his fiancée, and the high-level graft their deaths exposed.

“Allegedly a hit ordered by a businessman with connections to politicians, the killings have become a lightning rod for public outrage at graft in public life,” the newswire wrote.

Commenting on the result of Smer, it reminded that the party lacks obvious coalition partners as it has ruled out teaming up with ĽSNS.

The Bloomberg newswire reported that Slovak anti-corruption parties – propelled by lingering anger at the killing of an investigative reporter two years ago – scored an unexpectedly large majority in elections.

It went on to write that the result leaves Slovakia rooted in Europe’s mainstream, staving off the risk of deviation along the rebellious paths followed by neighbouring Hungary and Poland.

“It comes less than a year after voters in the European Union and euro-region member elected their first female president in a rebuke to nationalist and euroskeptic forces,” the newswire wrote.

It also reported that Matovič is a divisive character “who’s squabbled in the past with potential allies, questioning whether he can fulfil promises to work with opposition colleagues to create a stable government”.

The Italian daily La Repubblica brands the result of the election a political revolution in Slovakia.

A new phase begins in the centre of Europe, according to the daily, which labels it anti-corruption and pro-European but also traditionalist and national-conservative, with possible Polish-style homophobic fringes.

After the era of the “mafia state” a new age seems to be starting in Slovakia. Similarly to other countries, it will be a time of political marketing and populism, the Czech Hospodářské Noviny daily reported.

The sweeping victory of OĽaNO showed that although Slovaks want to put the ruling Smer aside after 12 years in power, they are driven by emotions and marketing rather than quality programmes presented by other democratic opposition parties.

“Slovaks are no exception in Europe; rather, they confirm the rule,” the daily wrote.

The Idnes.cz news website focused in its report on the responses of Czech opposition politicians, who say the outcome of the Slovak elections is proof that change is possible.

Commenting on the results, Czech Deputy PM and ČSSD chair Jan Hamáček said that Slovak voters have redrawn the political map in their country, since the far-right party of Marian Kotleba did not score as much as some polls predicted.

The Czech Deník N daily called the Slovak parliamentary election “dramatic”, pointing to the fact that the results are different from the last polls before the vote, as well as exit polls published after the polling stations closed.

The daily pointed to the large margin between OĽaNO and other parties, claiming that “it is the first time in the era of independent Slovakia when Vladimír Mečiar or Robert Fico did not win the election”.

Igor Matovič, often called “a lunatic from Trnava” by Smer chair Robert Fico, has become a main star of the Slovak parliamentary election and most likely a future Slovak PM, the Czech Radio broadcaster reported. While Matovič celebrates, other parties contemplate their failure.

The broadcaster put together a list of the five main outcomes of the election, including the end of the Smer era, the sweeping victory of Matovič, the loss of the Liberals, the end to a dramatic rise of the far right, and the lack of Hungarian minority representatives in the parliament.

In an opinion piece, the Czech weekly Respekt focused on the end of Robert Fico and his dark era of dominating Slovak politics. Although it will be hard for the new government, the country was given a big opportunity to change.

After nearly 14 years of power being concentrated in the hands of one person and one party, those serving them are losing their cover and the change that comes may exceed the classic exchange of power.

“The king of the 2020 election is Igor Matovič; the Liberals will be missing in the parliament, as well as the Hungarian party,” the weekly wrote.