The first week of March left people in Slovakia wondering what they should worry about more. 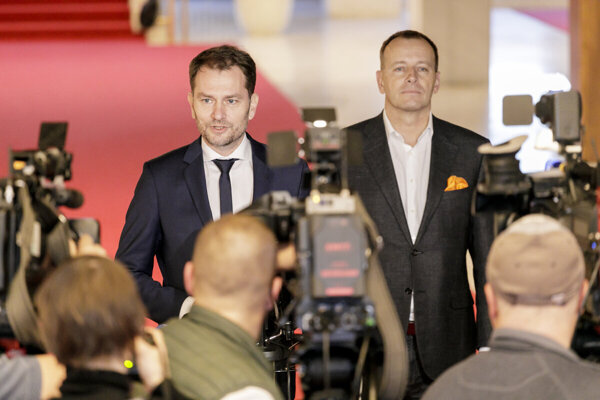 It is tinier than the voter support for the Democratic Party yet overshadows the ongoing coalition talks. What is it? There couldn’t be an easier riddle these days in Slovakia.

The coronavirus has finally made an official appearance in Slovakia, which was an island of no infection until midday on Friday. The panic that most sensible observers fear much more than the actual virus had, of course, broken out even before that, as news about the rising numbers of patients was coming in from surrounding countries. As of Monday, March 9, five cases have officially been confirmed in the country and four more Slovak citizens are quarantined across the border in Austria, officially counting among the cases over there.

The situation in Slovakia remains stable for now, although there have been reports of empty shelves in some supermarkets, with antibacterial soaps and detergents in high demand.

The outgoing government took a number of preventive measures, including a ban on flights between Slovakia and Italy and shutting down schools mainly in the Bratislava Region. PM Peter Pellegrini, Slovakia’s onetime best-known coronavirus suspect, who also happens to be the acting health minister, called on people not to panic, all the while advising them to stay put in their homes.

The much-criticised text messages that the Health Ministry sent to all phone numbers registered in the country on Saturday did not exactly help those who might have been panicking, let alone foreigners who had problems understanding whom the messages were even coming from.

The main concerns voiced in connection with a possible wider outbreak of the infection in Slovakia include the ill-preparedness of the country’s health care system, the apparent incapability of the authorities to communicate with each other and with its citizens, and the exchange of governments that is expected to take place within a few weeks.

The Slovak Spectator will keep you up-to-date with the situation in our section on the coronavirus.

Read more articles by the topic
This article is also related to other trending topics
Last Week in Slovakia, Coronavirus