Radio_Head Awards 2019: No music, no audience and a masked host

Fans witnessed the most bizarre music awards in its entire history. 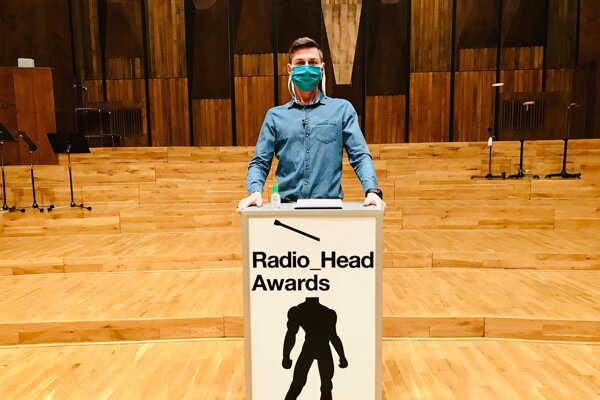 Martin Staňo, a Rádio_FM presenter, walks in the corridor of the Slovak Radio building with a mask on his face when he stops, places his bag on a table and pulls out golden Radio_Head Awards envelopes out of the bag.

“You will witness music awards without music today,” he said, adding this award ceremony will be the most bizarre in its entire history.

The coronavirus affected Radio_Head Awards 2019, held for the twelfth time, just like the lives of many around the world. The alternative public radio station Rádio_FM, which organises the awards, did not want to defer or cancel the event. Instead, they decided to do it without artists, live music, and music fans.

“It was not an easy decision,” Rádio_FM head Janka Imrichová said, as quoted by the Sme daily.

These were the main categories, in which the public could vote. Winners in 10 other categories were voted for by the jury and announced by the host on the March 18 evening.

Album of the Year: Storytelling from a couch

Bratislava-based rapper with Russian roots Gleb won the best album of 2019. He has been around for a decade, performing under different pseudonyms.

Nonetheless, it is his sophomore album, Gauč Storytelling, that made him a winner in the most prestigious category.

“He is natural,” said Daniel Baláž of Rádio_FM as quoted by Sme.

He added Gleb is not trying to copy anyone and mixes the genres he likes, including grime, drum’n’bass and glitch hop.

In the past, he said he did not like any rappers from Slovakia. The jury voted Gauč Storytelling the best Rap/Hip Hop/R&B album as well.

Song of the Year from a commercial

The group Billy Barman took home the Song of the Year for their record Doba doba (Era Era), which came out last May.

“Everytime Billy Barman is nominated, they win something,” Baláž said. “This comes as no surprise.”

The song, moreover, appeared in a commercial for a mobile operator.

Best New Artist not that new

The young Slovak songwriter, producer and singer is not a completely new name, though. He started his career in the band Don’t Trust Butterflies, which won the Best New Artist just last year.

Rappers Vec and Tono S. won the last major category, Debut Album of the Year. They joined forces and created the project Ultrazvuk in 2018. Their first album took the name of the project as well.

“People like their album because they are serious in some lyrics but portray themselves as old men back in puberty in others,” Baláž claimed.

He added people of all age groups can relate to a song on the album. The lyrics do not react to any political or societal topics but are rather of a humourous nature. The first single off the album was Teleport.

Last year, Vec took home an award for the best song, which was politically motivated.

ALBUM OF THE YEAR (voted by the jury): Katarína Máliková - Postalgia