Subterranean routes under Nové Mesto nad Váhom are being explored

Help from speleologists with breathing apparatus is needed to explore previously unknown shafts. 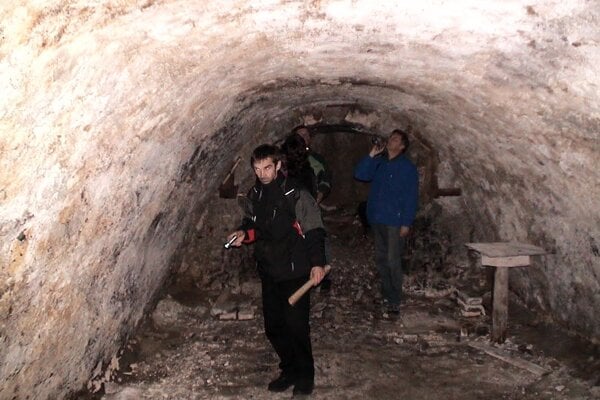 Under the houses and streets in the centre of Nové Mesto nad Váhom, where hundreds of inhabitants walk every day and where their predecessors have walked since the Middle Ages, there is a network of subterranean passages. There is evidence that some of them were even inhabited.

When, several years ago, the path under the Námestie Slobody (Liberty Square) collapsed inwards, many people were scared. The disaster almost took the life of a 74-year-old pensioner, who was walking on the broken pavement. It opened a hole 5-metres in depth that revealed an old cellar. The first floor opened up by the hole, however, was much deeper.

The multi-floored cellar probably originated in the 16th century and it was built of loess.

“Loess, when dry, is very solid,” said Jana Mydliarová who explored the remains of the cellars and corridors under the town’s centre and wrote a book about her research called Underground Corridors in Nové Mesto nad Váhom.

“It offers proper conditions for building underground spaces,” she continues. “However, when water gets inside, it becomes unstable and so the landslide happened. Softening of the ground and simultaneous undermining by water may lead to a collapse of the corridor or the whole compound.”

Groundwater in the area of the old town, she found, is located at a depth of 16 to 18 metres which was enough to build three floors of corridors.

“In some cellars, there were wells as the main sources of water,” Mydliarová explained. One of the wells was discovered in the town cellar.