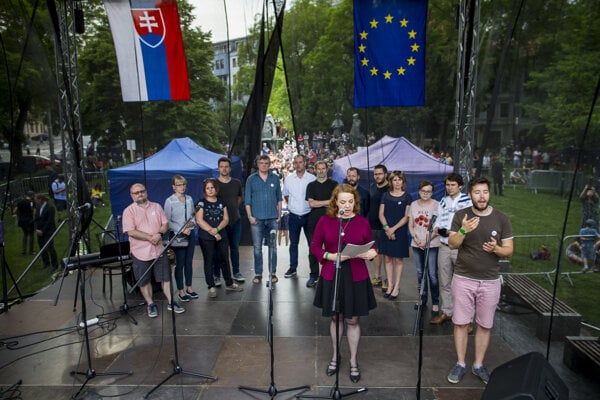 Beata Balogová speaks to one of the For a Decent Slovakia protests in 2018 on behalf of Slovakia's journalists. Balogová also serves as the vice-chair of the executive board of the International Press Institute. (Source: Sme)
Font size:A-|A+11

Small newspapers can carry stories that far exceed in importance their circulation numbers or sizes of their staff. They often nourish authors with a unique voice that resonates long after the stories are printed or published on the website. Sometimes small newspapers can be trendsetters in journalistic standards or founders of a tradition. Their community of reporters, authors and intellectuals often leave fingerprints on the media culture of a country.

The Slovak Spectator, an English language newspaper in Slovakia, carries some of these characteristics. Just like people, in the early stages of their lives newspapers also seek their voice, adopt ambitions and test their strength. So did the Spectator. It always had much higher ambitions than being a small community paper to entertain expats by listing pubs and English-speaking cinemas.

Even though it often faced economic hardship, the paper has been around long enough to tell the story of Slovakia coming-of-age as a democratic country: witnessing attempts to hijack democracy, interpreting complex local battles for the international community and, above all, reporting on daily events in a clear and balanced way. After a while, some native Slovaks sought the news in the Spectator for more than just an English-language tutorial.

The Spectator refused to become a mere publicity channel for tourist attractions and Slovak folklore as past governments often expected foreign language outlets to operate. A whole generation of Slovak politicians, especially those from the heritage line of Vladimír Mečiar and Robert Fico, routinely dismissed critical stories written by foreign journalists: they spoke to the wrong sources, they oversimplified the situation and above all, they were paid by enemies of Slovakia.

This argument could have hardly worked in the case of The Slovak Spectator: its authors were quite often locals with an insight and understanding of the nuances of Slovak politics. Yet, newspapers and media are just as fair and honest as the people working for it. The small newspaper was extremely lucky to attract many talented, devoted and open-minded journalists. Above all, it has been lucky to be part of Petit Press, a publishing house respecting journalistic freedom. 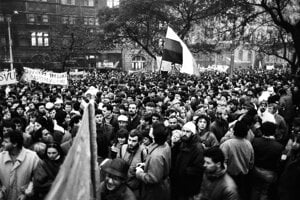 Related articleFreedom can be lost democratically, from the insideRead more

On a personal note, I ran the paper as its editor-in-chief for eleven years. I left the paper five years ago to become the editor-in-chief of the daily Sme. I carried with me my faith in separation of news from opinion, talking to multiple sources and giving voice to the voiceless, values that we lived with at the Spectator. No matter how the media environment changes, I still believe in the golden rules of balanced journalism, which do not change with technology or audience tastes.

Trials to deny the watchdog role

Since I have left the Spectator, efforts by some politicians to redefine journalism have intensified. Greatly encouraged by the autocratic prime minister of Hungary Viktor Orbán, some Slovak politicians deny the watchdog role of journalism: nobody elected journalists to control the government, they say. Journalists should first of all “inform about the work of government” while "inform" in their understanding means passing on political statements without any interpretation and context. 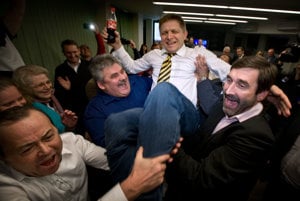 This indeed is not that different from how the Communist Party defined the role of media under Communism: journalists were expected to identify with the official state propaganda line and assist the state in indoctrinating the public. The past years have shown the tragic shortcomings of state bodies in checking the elected public officials in how they use power.

We have seen Marian Kočner building his own mafia state within the state with the silent approval of the former political establishment. It was only thanks to the media and its efforts to watch the powerful, that the public learned how deeply decay and corruption reached within the judiciary, the police and prosecution.

Enemies of the press never rest

Enemies of the press never rest. Especially not in times of restrictions that governments have been taking to limit the spread of COVID-19 virus. The International Press Institute, a press freedom advocacy organisation, warned that “governments in Europe are increasingly taking advantage of emergency legislation aimed at tackling the coronavirus to push through restrictions which seriously erode press freedom."

The most serious tendencies have been observed in Hungary and Russia.

The repertoire that governments can use to “discipline the far too questioning press” ranges from verbal attacks up to prison sentences. Politicians would routinely suggest that when human lives are in danger the critical press should help the government instead scrutinising it.

When the media warns about the lack of health protective materials, masks or test kits, journalists might be accused of spreading false news and panic. In Hungary, this takes the form of a law that criminalises the spreading of “false” news, but the government draws the line of what is false and what is true.

This further suffocates the already struggling media pluralism in an EU member country, potentially inspiring other politicians in the region: if Hungary can get away with curbing media freedom, so can they.

Our times pose unseen challenges for journalists of relatively young democracies. Yet once again sticking to the best media practices and golden rules will get us through and ensure that the essence of our profession is not distorted.

We are here to serve the public, to bring fact-checked news, to make the best selection so that the public can make good decisions. We are also here to scrutinise the decisions of governments if these were made for the best interest of the public. We are also here to give voice to the voiceless, to remind our readers of human tragedies and stories of heroism, to inspire the best in them so that solidarity, humanism, fairness and, above all, a sense of truth survives.