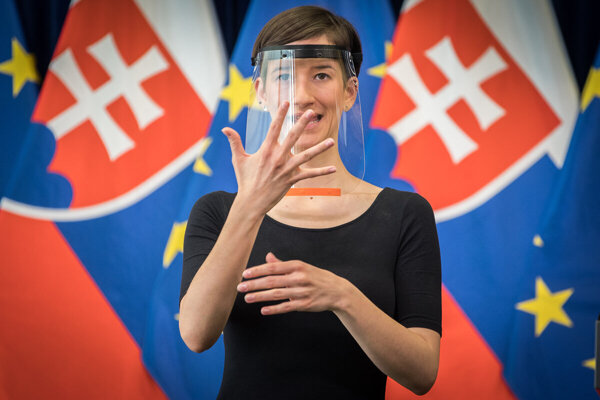 Interpreter Barbara Randušková during one of the press conferences. (Source: SME)
Font size:A-|A+83

Barbara Randušková can often be seen at press conferences on the coronavirus held by PM Igor Matovič, interpreting the information for the deaf and hard of hearing audience.

She grew up in Bratislava, where she studied psychology at Comenius University and later at Regent’s University London. She started learning sign language eight years ago, although nobody from her family is deaf or hard of hearing.

Randušková explains in an interview how new gestures for words that have not been used before or gestures representing the names of politicians are generated. She often wears black clothes at the press conferences to set off her hands and a protective shield instead of a face mask so that people can see her mimic and read her lips.

Since the coronavirus outbreak, you have become an inseparable part of press conferences, interpreting PM Igor Matovič. Is it a big change for you?

It’s hectic. For the first time I am interpreting information live, and it’s often rare to see an interpreter accompanying top state representatives.

Since the coronavirus outbreak, we’ve been on constant alert for the Government Office, with our programme changing quite often.

I also see that people notice us and are more aware of sign language. A great change is that the deaf and hard of hearing have immediate access to current information.

For me, it’s first of all a great responsibility. I interpret important information for the deaf and hard of hearing, which is often a question of life and death. Appearing in live broadcasts is stressful, but it’s also my job. 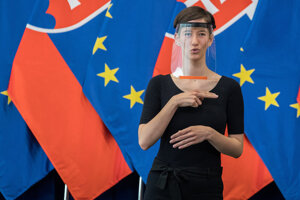 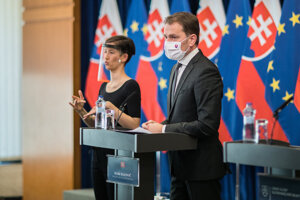 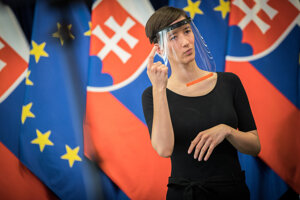 Press conferences are now often announced at short notice. How do you manage this?

Quickly. Once, I had to replace my colleague who was stuck in a traffic jam. I was told at 8:45 that I need to be at the Government Office at 9:20.

Of four interpreters in our group, I’m the only one living directly in Bratislava. My colleagues are from Trnava and Nitra, so it’s me who’s going to the press conferences announced at short notice.