On the other hand, the second poll shows Za Ľudí of ex-president Kiska outside the parliament. 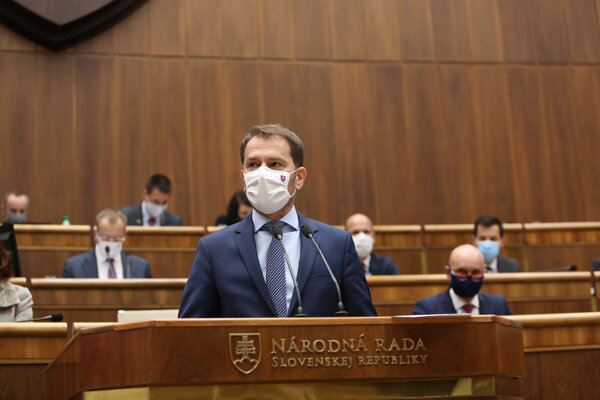 Roughly two months after the parliamentary election, the popularity of the ruling Ordinary People and Independent Personalities (OĽaNO) has sky-rocketed. In the recent AKO poll, it received nearly 5 more percent than on February 29.

On the other hand, Za Ľudí of ex-president Andrej Kiska has dropped out of parliament, garnering the support of only 3 percent of Slovaks. It is already the second poll to show falling support for the party.

Coronavirus may have an impact

In the parliamentary election, the party won 25.02 percent of the vote.

Although the adoption of the governmental programme statement has been complicated by the coronavirus pandemic and the cabinet had to start dealing with the infection right after its appointment, the AKO poll showed that the support of PM Igor Matovič’s movement has increased.

“The reliability interval is important for polls, but this one shows that Matovič’s movement isn’t dropping, but increasing by a few percent,” said Václav Hřích, head of AKO, as quoted by Nový Čas. “This reflects how often he’s communicating. He took a role of a person who communicates about the coronavirus crisis and since people are interested, it increases attention on him.”

However, the coronavirus crisis may have the opposite effect later.

“If the state fails to manage the coronavirus or its economic results worsen, impacting people’s wallets negatively, OĽaNO’s chair, the most visible personality related to the crisis, will be the first one to be blamed,” Hřích added for Nový Čas.

Second in the AKO poll would be Smer with 18.3 percent of the vote, followed by Sme Rodina with 10 percent, Freedom and Solidarity (SaS) with 9.7 percent, Progressive Slovakia (PS) with 6.9 percent, and the far-right Kotlebovci – People’s Party Our Slovakia with 6.4 percent.

From the current parties that made it to the parliament in late February, only Andrej Kiska’s Za Ľudí would remain outside the parliament, garnering only 3 percent of the vote. It would be surpassed by other non-parliamentary parties, namely the Hungarian Community Togetherness (MKS) with 4.4 percent and the Christian Democratic Movement (KDH) with 3.7 percent.

One of the negative factors that caused the fall of Za Ľudí may have been the loss of its election leader, who did not take his parliamentary mandate due to health problems, Hřích said.

Another factor he pointed to is the fall of ĽSNS.

“This has been caused by the fact that Smer is successful with its opposition politics, unlike ĽSNS, which is hard to be seen and the public doesn’t know the solutions they would propose to fight the coronavirus,” Hřích said, as quoted by Nový Čas.

Other parties to increase in the poll are coalition parties Sme Rodina and SaS, which according to Hřích benefit from being in the government. He has also warned of the potential conflicts between the ruling parties.

Read more articles by the topic
This article is also related to other trending topics: Hnutie SME RODINA, Za ľudí