Inspectorate deals with police intervention against Roma children in Krompachy

The mother of the children from the quarantined settlement claims the police beat them. 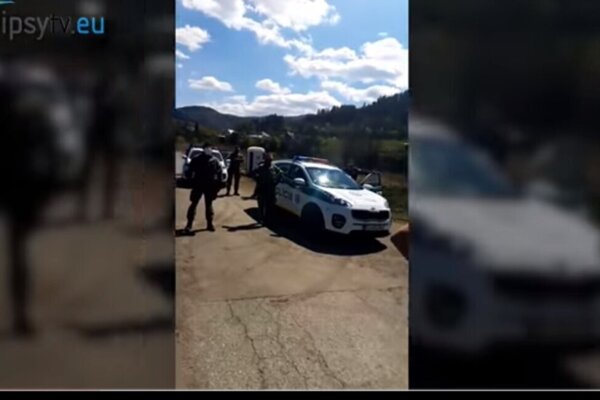 The Interior Ministry inspectorate is dealing with allegations that police officers beat children from a quarantined marginalised settlement in the eastern-Slovak town of Krompachy.

The gipsytv.eu website first reported about the incident on April 28. The video shows children with visible bodily injuries. Five children aged 7 - 11 years were reportedly playing near the brook that flows through the settlement.

Their mother Anna Holubová says that the soldiers who guard the quarantined settlement would normally let the children go to the brook, but the police officers who were present on Tuesday acted differently.

"First, my seven-year-old girl, my daughter, was told to be silent, and they slapped her on the leg and said that if they came there again, they would shoot them," Holubová said in the gipsytv.eu report. All the children were beaten and came home crying.

The Sme daily reported that an official report states the children went outside the quarantined area and the patrol told them to go back. The officer who was on duty reportedly left his baton in his car, but that does not exclude the possibility that he might have hit the children with a stick, like their mother suggested.

The police have confirmed an incident has occurred.

"Since the police officer and the locals' versions were contradictory, we have passed the matter on to the inspectorate, to ensure it is objectively investigated," the Košice police spokesperson Jana Mésarová said.

There have been no other complaints from the inhabitants of the settlement.

The government plenipotentiary for Roma communities Andrea Bučková considers the police intervention against the children inappropriate and inadequate.

The Slovak National Human Rights Centre called on the Police Corps President Milan Lučanský to check on the case.

The Union of Roma in Slovakia requested an investigation into the incident by an independent commission.

"We do not trust in the impartiality of the inspectorate of the Interior Ministry. It has happened repeatedly that interventions like this have ended in charges against the victims while the police intervention was defined as legitimate," the union wrote.

The ministry claims the inspectorate will work independently. They also said that the information they have from the Košice police is not in line with what the Union of Roma presented at their press conference.

The Police Corps Presidium declined to comment on the case.